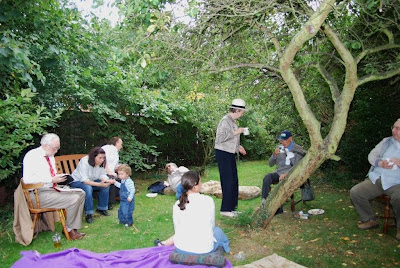 NEW WORKER supporters, friends and readers enjoyed the first reasonably sunny, warm, dry day for several weeks last Saturday in a south London back garden with the annual New Worker garden party in Charlton.
Comrades enjoyed good food and drink and discussion on topics ranging from the early Christian church and the spin-doctoring prowess of the Emperor Constantine, to current events in Pakistan, to home-brewed wine, to football matches and parking. A toddler also discovered that apples grow on trees.
The event raised just under £60 for the paper.
Posted by london communists at 10:28 pm No comments:

MEMBERS of the RMT transport union last week called off a planned 72-hour Tube strike after TubeLine – a private consortium in charge of work on the Jubilee, Northern and Piccadilly lines – made an improved pay offer. Around 1,000 RMT members had been set to walk out on strike on Wednesday.
The improved offer follows the union warning TubeLine boss Terry Morgan that he should stop throwing petty insults around and get around the table to negotiate a solution to the current pay and conditions dispute. This followed Morgan claiming that the planned strike was “political”.
The union was demanding that pay and conditions for TubeLine employees should be raised substantially to bring them up to those agreed by Metronet for people doing identical work.
Meanwhile more than 120 RMT cleaners working for OCS on its Eurostar contract will strike for 24 hours from 06:00 on Bank Holiday Monday, 25th August, in their campaign to end poverty pay and win decent working conditions.
The cleaners, whose hourly pay is more than £1 an hour below the London Living Wage, returned a 100 per cent vote for action and will not book on for shifts that commence between 06:00 on Monday 25th August 25 and 05:59 on Tuesday 26th August.
“Eurostar trades on its ethical reputation and claims to tread lightly on the planet, yet it seems happy for OCS to stamp all over the people who keep their trains and stations clean,” RMT general secretary Bob Crow said.

TORY London mayor Boris Johnson last week lost his third senior adviser – one of seven deputy mayors he appointed to help him with the technical aspects of trying to run the capital. Tom Parker resigned as chief of staff for Transport for London after just two months in office, when Johnson told him he would not, after all, be given control of TFL as he had been promised.
Parker was appointed as one of the City of London’s most successful private equity businessmen with a brief to restructure the Greater London Authority and then do the same for TFl’s £6.5 billion budget. too political
But Johnson changed his mind and decided to take personal charge of TFl and said it was “absolutely crucial” to doing his job effectively. He said the decisions were “too political” for an unelected aide to make.
Trade unions had dubbed Parker “the Prince of Darkness” for his ruthlessness and cost-cutting in businesses he took over, like the AA and Kwik-Fit.
Former London mayor Ken Livingstone commented: “Tim Parker was supposed to be the cornerstone of Boris Johnson’s administration. His exit after just a couple of months in fact confirms the chaos which has existed in Boris Johnson’s administration since day one”.
Posted by london communists at 10:51 am No comments: 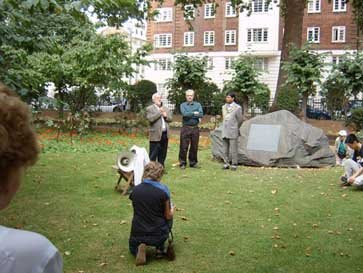 by Robert Laurie
ON WEDNESDAY 6th August 1945 the United States Air Force dropped their atomic bomb on the Japanese city of Hiroshima killing about 100,000 instantly and leaving countless others to die of cancers decades later. Peace activists mark the tragedy of Hiroshima every year and among the commemorations was that organised by CND in central London’s Tavistock Square.
The ceremony, established in 1967 by the then Camden Mayor Millie Miller was this year attended by about 200 people young and old. Compered by Islington North Labour MP Jeremy Corbyn, the Workers Music Association and Raised Voices choirs sang in English and Japanese. The speakers included local Labour MP and former Health Minister Frank Dobson, Camden’s present Mayor Nurul Islam and local vicar Paul Hawkins. CND Chair Kate Hudson, veteran pacifist Pat Arrowsmith and thirteen year old Sonia from Children Against the War also spoke. Pat Arrowsmith said that while it was regrettable that there is still a need for CND half a century after it was founded in 1958 the movement has had a number of encouraging successes such as the non-proliferation treaties and South Africa’s abandonment of nuclear weapons under Nelson Mandela.
She took comfort in the fact that leading American politicians, when out of office, condemn nuclear weapons. Tony Benn concluded the ceremony by reminding the audience that the bombing of Hiroshima was the first shot of the Cold War because the incineration of the city was intended to be a warning to the Soviet Union.
Posted by london communists at 9:32 pm No comments: 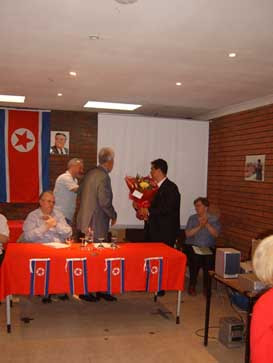 The historic victory of the Korean people against US imperialism in the Korean War was celebrated in west London on 26th July at a meeting that included discussions, a musical interlude followed by a barbecue held in the grounds of Saklatvala Hall in Southall. June 25th to 27th July was the month of solidarity with the Korean people. On 25th June 1950 US troops backed by the south Korean lackeys invaded north Korea and started a ferocious war that claimed the lives of millions until it ended with the Americans signing a humiliating armistice on 27th July 1953.
photo: presentation to Cde Jang Song Chol of the DPR Korean embassy in London
Posted by london communists at 9:27 pm No comments: