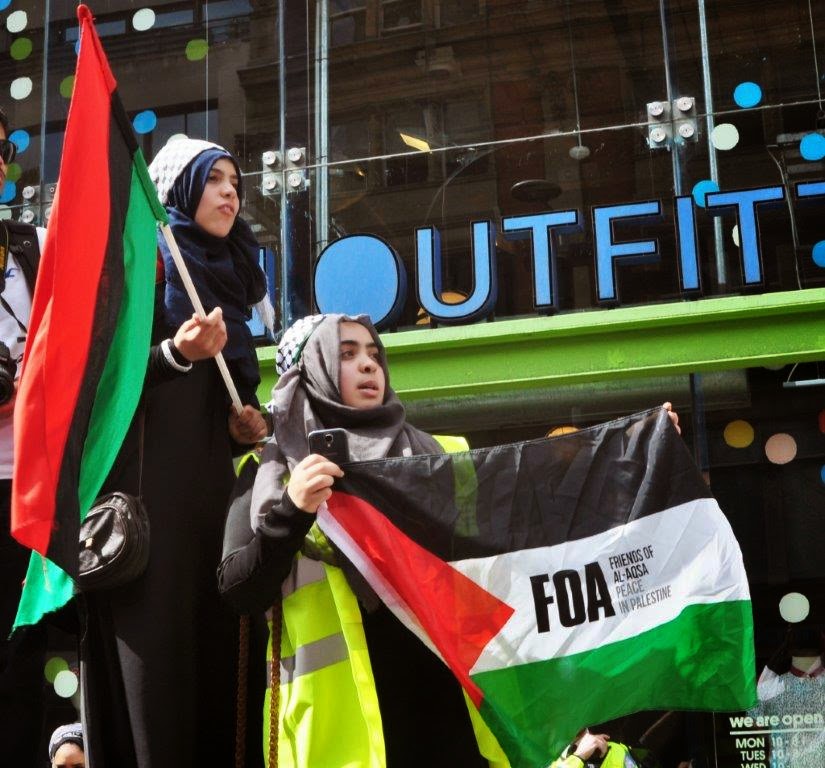 THOUSANDS upon thousands of people gathered outside Downing Street last Saturday and marched to the Israeli Embassy via Hyde Park and Kensington Gardens, in temperatures of around 30 degrees to protest at the latest Israeli onslaught and invasion of Gaza.
British Muslims from various ethnic groups and cultures joined Palestinians, people from other countries, and many other British people, young and old, male and female, able-bodied, and disabled. Despite a strong police presence, there was no reported trouble.
Along the route, occasionally devout Muslims would move to the side of the pavement, or step into a local park and unroll their mat for prayer, while the elderly and those with disabilities still made their way along the route, even though they had fallen behind the official police-line marking the rear of the march, and were even behind the army of well organised road-sweepers whose job it was to clean-up the streets in its wake.
Placards and posters called for Gaza to be free, and for Israel to change its policy and stop behaving in a fascist, and highly destructive manner.
Despite the continuous pro-Israeli British media, and total lack of impartiality from the BBC, it is obvious that their propaganda is not working.
Multitudes of intelligent and right-minded people marched through London, demonstrating that no matter who has control of the state media, reality will still seep through into the human mind and protests against lying and oppression will emerge from the masses.
Perhaps one of the most poignant events today, occurred outside Hyde Park, where a small group of Jewish people representing the “Boycott Israeli Goods” (BIG) campaign, unfurled a banner which said: “It’s Kosher to boycott Israeli Goods” and “Say No To Injustice”.
Many pro-Palestinian protestors thanked them for their presence and support, proving that a protest against Israel is not necessarily a campaign against Jewish people, nor motivated by any notions of anti-Semitism. This protest in London should send shock waves through Tel Aviv, along with similar demonstrations that have been happening in major towns and cities throughout the world.
An Israeli spokesperson (speaking to the BBC World Service), recently justified his country’s latest military incursion into Gaza, as being a product of Israel’s right to legitimate “self-defence”.
In the exercising of this right the Israeli military machine – led by tanks – entered Gaza following a sustained aerial bombardment that left 200 Palestinians dead, and around 1200 severely wounded.
This indiscriminate use of force has killed men, women, and children of all ages, including those with disabilities who lacked the physical ability to attempt to run away from the Israeli bombs and heavily armed assault troops.
Although Hamas has fired rockets into Israel as a protest against Israeli  aggression, it is a reported fact that only one Israeli has died, and he was an Israeli soldier killed in the line of duty. No Israeli citizens have died from the Hamas use of rockets in the recent exchanges.
The appalling situation facing the oppressed Palestinians has gripped the imagination of progressive people around the world and has inspired one demonstration after another, with each expressing an uncompromising solidarity with the people of Gaza.
There will be another protest outside the Israeli embassy in Kensington on Saturday 26th July.

Posted by london communists at 4:54 pm No comments: 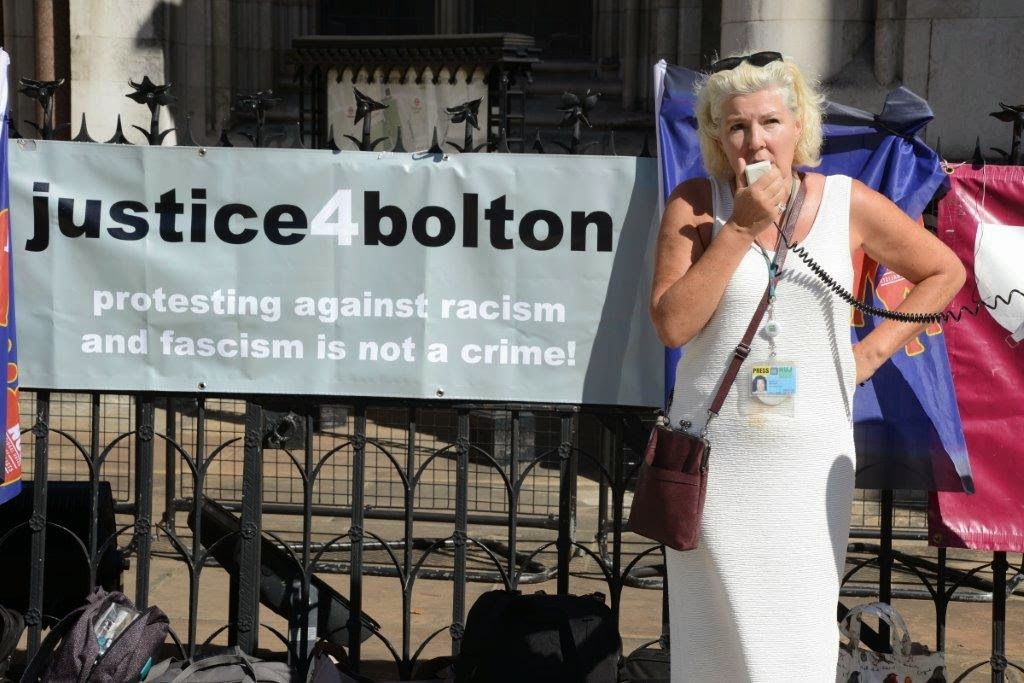 CAMPAIGNERS from justice4bolton last Tuesday  held a picket outside the Royal Courts of Justice in the Strand in support of a judicial appeal to demand that the Independent Police Complaints Authority publish the results of its investigation into police arrests of anti-fascists in Bolton four years ago.
The anti-fascists had mobilised through Unite Against Fascism (UAF) to stop the racist English Defence League (EDL) in Bolton on 20th March 2010.
The anti-fascists were gathered peacefully in their allotted spot when the police Tactical Aid Unit attacked them, charging into them and making 55 arrests, including a 63-year0old pensioner who was thrown to the ground and injured.
The campaigners say that now, after many months, and a fantastic response from so many people who were in Bolton that day, police investigations into conspiracy charges against the anti-fascist organisers have been stopped. Of the five anti fascists who were being prosecuted, one was found Not Guilty, two cases were dropped because of anti-fascist video evidence and two cases remain outstanding, one of which is an appeal against a guilty verdict.
The Independent Police Complaints Commission made an inquiry into the policing that day but has refused to release its final report, or video footage of the events that day taken by the police.

Posted by london communists at 4:40 pm No comments:

THE SOUTH East Alliance – a tiny racist and violent splinter group that broke away from the Islamophobic English Defence League a couple of years ago, faced absolute humiliation last Saturday after boasting they were going to march in force along Cricklewood Broadway – but only managed to mobilise 14 supporters plus another three who were too embarrassed to march with them.
Their declared target was an empty shop in the Broadway that was rumoured to a communications centre for the Muslim Brotherhood.
And the South East Alliance (SEA), whose membership overlaps with another racist splinter group, the English Volunteer Force, had tried to make this march before, on 14th June, but found their way blocked by a strong local anti-fascist turnout.
Last Saturday the SEA support had shrunk while the anti-fascist turnout multiplied. Brent Trades Council was there with its banner, members of the Labour Representation Committee, Paddington Number One RMT branch with their big banner, North-West London United, Fascist Free Kilburn, Polish anti-fascists Dywizjon 161, Southall Black Sisters, Unite Against Fascism, dozens of young people from Antifa – with five loud salsa drums – plus many, many local residents who just happened to be passing and decided to join in with the anti-fascists. 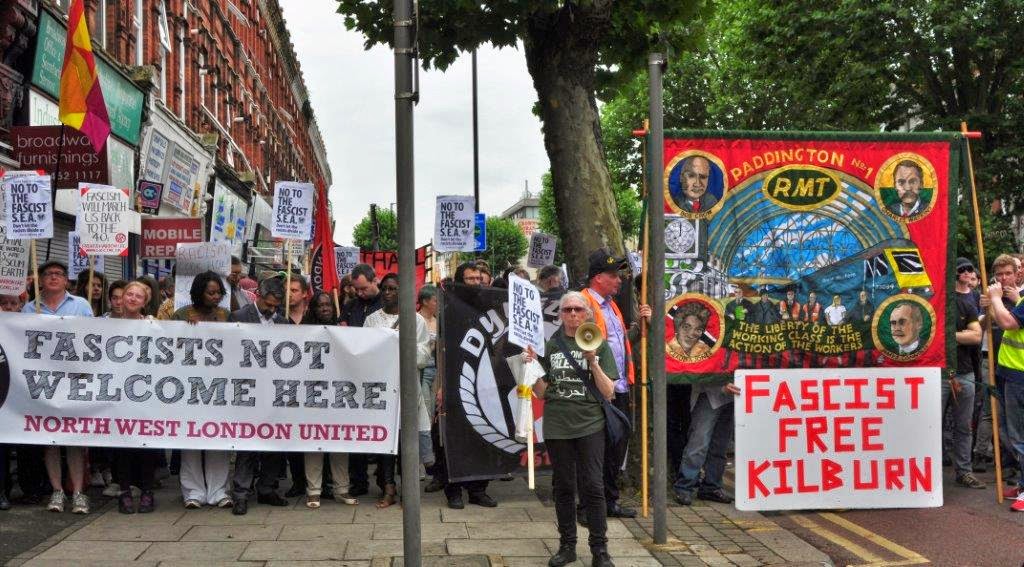 SEA stood no chance of getting past that lot with just 14 supporters and three others who decided to just hang around in doorways rather than join their colleagues.
SEA leader Paul Pitt made his usual protests to the police for failing to clear the anti-fascists from his intended route – but without much conviction. Even he could see his position was ridiculous.
When his party was just 10-strong he decided to march at the gallop up to the pen the police had prepared shouting all the way. His followers straggled behind holding up to six flags a-piece because they did not have enough people to hold one each. But Pitt’s arrogance was all bravado. He dived into the safety of the pen quickly enough and from behind the steel barriers and a police cordon tried to exchange epithets with the massed anti-fascists.
But he was out-shouted by the anti-fascists, asking: “Where’s your demo gone?” and: “There’s many, many, more of us than you; we’re black and white and Asian and we’re Jew; there’s many, many, more of us than you.”
Paul Sillet from Unite Against Fascism, with the aid of a megaphone, was able to tell the SEA that no one there wanted them and that the bagel shop behind the anti-fascists supported them – as did many other shopkeepers and shoppers.
Finally the salsa drums came into play and the fascists were drowned out completely by the sound – and decided to go home.
But anti-fascists made the point that although it may seem hardly worthwhile turning out to stop such a tiny bunch of fascists, it is still important to do so because it is anti-fascist opposition that discourages the fascists from coming out.
If the fascists were allowed to march unopposed their numbers would start to grow. Now it will take Paul Pitt and his followers a long time to live down this worst humiliation yet.
Posted by london communists at 4:29 pm No comments: 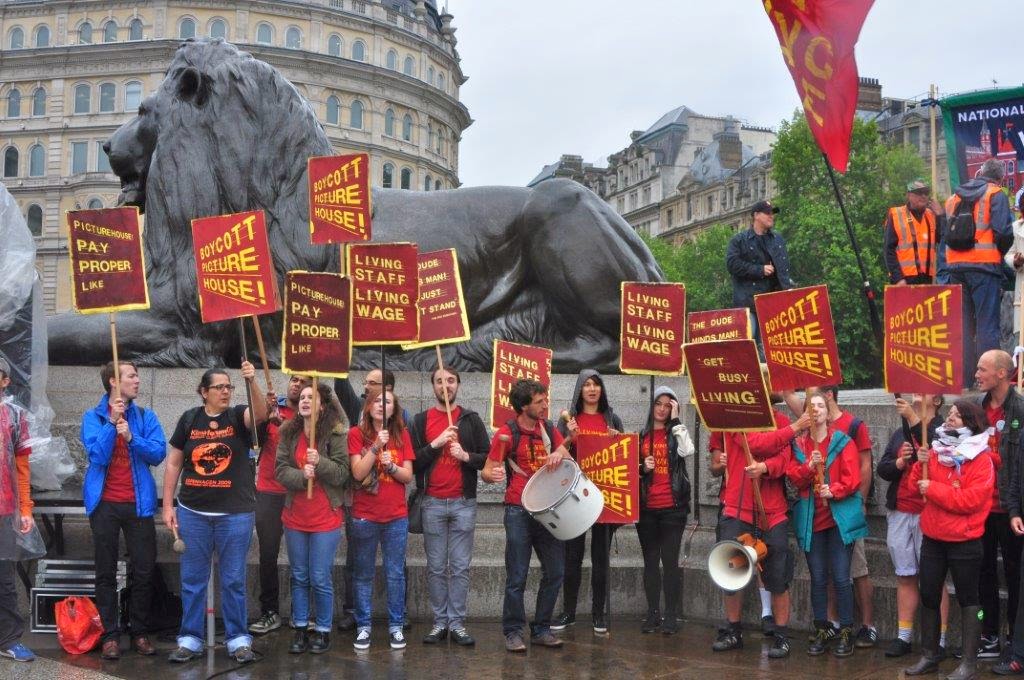 by New Worker correspondent
CINEMA workers from the Ritzy in Brixton, south London last week took strike action for the 10th time in their long-running battle for a living wage.
The Bectu members marched from the British Film Institute on the Southbank to City Hall and the office of London Mayor, Boris Johnson, for a rally where they were addressed by their union general secretary Gerry Morrissey.
They were joined by colleagues from the Curzon circuit, who earlier this year won a hard fought campaign to secure union recognition with their employer.
The adoption of the recommended London Living Wage (£8.80 an hour) and the Living Wage outside London (£7.65) is becoming increasingly central to efforts across Britain to address low pay.
Both rates are set by the Living Wage Foundation and have found support amongst hundreds of public and private sector employers.  Mayor Boris Johnson is quoted on the Foundation’s website saying: “Paying the London Living Wage is not only morally right, but makes good business sense too.”
The National Minimum Wage (adult rate £6.31) is widely recognised on all sides as ineffective in the battle against poverty wages.
Despite nine strikes at the Ritzy, Picturehouses cinemas, part of the multi-national and profitable Cineworld, is digging in and shows no signs of wanting to resolve the dispute which has closed its most profitable cinema on all strike days.
When senior management walked away at the 11th hour from peace talks scheduled for 4th June, Bectu called for a wholesale boycott of all Picturehouse venues to press home the case. Several visits have taken place with Bectu officials receiving a warm welcome at each.
Bectu’s support for low-paid workers throughout the creative sector has seen the Living Wage adopted into pay structures by BBC Contractors, BFI IMAX, BFI Southbank (and amongst contractors engaged by the BFI), at ITV, the Royal Opera House and National Theatre.
As well as supporting Ritzy workers and other members seeking to embed the Living Wage into pay policy, Bectu is also seeking to secure the London Living Wage for workers in West End theatres as part of the pay and conditions claim submitted last week.
Posted by london communists at 8:09 pm No comments:

MORE than 100 people gathered in Jubilee Gardens on the south bank of the Thames on Saturday 5th July to remember and honour the men and women of the International Brigade – anti-fascists from all over the world who left their homes to come and fight against the Fascist General Franco’s war against the elected Republican government of Spain in 1936.
The brigaders who came from Britain had to defy their own government to take part in the struggle in Spain. The Communist Party of Great Britain organised secret passage through France and across the Pyrenees for the volunteers.
"They went", as the inscription in the International Brigade memorial in Jubilee gardens says, “because their open eyes could see no other way”.
They did not succeed. Franco’s army of mainly Moroccan troops was backed with money and the latest weaponry from Fascist Italy and Nazi Germany while the western “democracies” – France, Britain, the United States and others – sat on their hands and outlawed any involvement in the conflict.
Many believe that had they succeeded the advance of fascism in Europe would have been stopped and the Second World War could have been averted.
Representatives of many organisations laid wreaths, including the Spanish Embassy in London, a veteran of the Spanish Republicans who left Spain in 1939, after Franco’s triumph, to fight elsewhere against fascism in Europe, laid a wreath on behalf of those who had died in that fight.
Two veteran anti-fascists from London’s east End, Monty Goldman and Max Levitas, laid a red wreath on behalf of Hackney and Tower Hamlets branch of the Communist Party of Britain. And Kevin O’Hanrahan laid a wreath on behalf of the Connolly Association.
There were also wreaths from trade unionists, including a local branch of Aslef and from a group of young Polish anti-fascists who attended the event for the first time – showing that the international nature of the struggle against fascism carries on and is needed now in face of a new upsurge of fascism in Europe.
Posted by london communists at 9:52 pm No comments: