The Shining Star of Korea

Friends of the Korean revolution celebrated the 74th anniversary of the birth of dear leader Kim Jong Il at a number of events in February, including a reception and ceremony at the London embassy of the DPR Korea in London on the 12th and a meeting at the John Buckle Centre on 13th February.
In Democratic Korea Kim Jong Il’s birthday has long been known as the Day of the Shining Star and comrades paid tribute to the Korean leader’s immense contribution to the theory and practice of the world communist movement at a Friends of Korea meeting at the headquarters of the Revolutionary Communist Party of Britain (ML) in south London.
NCP leader Andy Brooks opened the meeting by paying tribute to Kim Jong Il, who steered the DPR of Korea through the difficult times that followed the death of great leader Kim Il Sung in 1994. He devoted his entire life to serving the Korean people in the cause of building a human-centred society, a cause that is espoused by the democratic and anti-imperialist forces the world over. He followed the footsteps of great leader Kim Il Sung in leading the country into the 21st century. Now the torch has passed to Kim Jong Un and under his leadership the DPRK has made giant strides in science and technology over the past few weeks with the test of a thermos-nuclear bomb and the successful launch of a satellite into space.
This was followed by other tributes from Michael Chant of the RCPB (ML), Dermot Hudson of the Korean Friendship Association and  DPRK Ambassador Hyong Hak Bong who answered questions from the audience on the current tense situation on the Korean peninsula. This was followed by Kim Jong Un guides Satellite launch! a DPRK film about last week’s tremendous space launch.
Comrades and friends joined diplomats and many others actively involved in solidarity with Democratic Korea across the country for the reception to mark the Day of the Shining Star at the DPRK embassy in London.
Last week, on 16th February, Andy Brooks, the NCP leader, joined others in laying floral tributes in front of the portraits of the great Korean leaders Kim Il Sung and Kim Jong Il at a ceremony at the DPRK embassy in London.
The Co-ordinating Committee of the Friends of Korea brings together all the major movements active in Korean friendship and solidarity work in Britain today. It is chaired by Andy Brooks and the secretary is Michael Chant. The committee organises meetings throughout the year, which are publicised by the supporting movements and on the Friends of Korea website.
Posted by london communists at 11:41 am No comments:

by New Worker correspondent
MORE THAN 200 anti-fascists and anti-racists packed into the main hall of the National Union of Teachers’ Hamilton House headquarters in Euston on Saturday 6th February for the annual conference of Unite Against Fascism.
The main themes of the meeting were combating Islamophobia and campaigning for the British government to accept its fair share of the hundreds of thousands of refugees now fleeing imperialist wars in Africa and the Middle East.
There was also a lot of practical talk about building support for a giant “Stand up to Racism” demonstration to be held in London on Saturday 19th March, to coincide with United Nations Anti-Racism Day. The demonstration will assemble at noon in Portland Place, London W1A, outside the BBC headquarters.
There were speakers from a wide range groups and struggles and organisations fighting racism and fascism – from those who had been literally fighting Nazi thugs in Dover the previous week to a French Holocaust survivor.
They included Martina Renner from Die Linke (the Left Party) in the German Bundestag, Claude Moraes MEP, Jo Cardwell from Stand up to Ukip, Denis Fernando from the Rainbow Coalition Against Racism, footballer Francis Duku from Show Racism the Red Card, Lindsey German from Stop the War, Julie Ward MEP who won her seat in the European Parliament by defeating Nick Griffin of the BNP, who had held the seat in Manchester.
There was Amal Azzudin, a refugee representing the Glasgow Girls Committee, Lee Jasper from Black Activists Rising, Wilf Sullivan, who is the TUC race relations officer, Anne Swift representing the NUT, Talha Ahmed from the Muslim Council of Britain, and two black women MPs: Diane Abbott and Kate Osamor.
It was interesting to note that women frequently outnumbered men amongst the platform speakers at various sessions – and they made up at least half of the total number of participants attending the conference.
Topics of debate included: “How do we defeat fascism, the far right Islamophobia and anti-Semitism in Europe”; “Cuts, crisis and scapegoating immigrants”; “Challenging fascist and far right groups in Britain”; and “Black lives matter – institutional racism and the police”.
Diane Abbott spoke of her visit with Jeremy Corbyn to the massive refugee camp In Calais, full of refugees hoping to come to Britain, to see first-hand what the conditions are like for people staying there.
She spoke of the appalling and unhealthy conditions there that no human beings should have to endure and of the terrible effects of the crisis on the children involved.
She also spoke of the British government’s responsibility for creating the crisis through direct and indirect intervention in the Middle East.
Claude Moraes, who has also visited the camp at Calais, said: “The most shocking thing about Calais – and there are many things that shock – is that it is an issue that is very solvable with the collective response of two of the world’s biggest economies, which should be cooperating on these issues.”
The New Worker had a stall at the event. During the contributions-from-the-floor part of the debate on fighting fascism in Europe, Daphne Liddle, speaking for the New Worker, raised the issue of the Nazi-supporting government of Ukraine, the outlawing of communism and anti-fascism, the desecration of the Babi Yar memorial and that the British army is involved in training and army these Nazis.
There was a good response to the point and afterwards a number of people came up to the New Worker stall asking to be put in touch with Solidarity with Anti-fascist Resistance in Ukraine (SARU).

Posted by london communists at 4:52 pm No comments:

Down with the puppet regime! 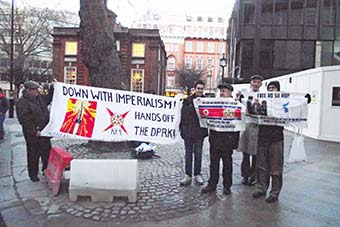 Korean solidarity activists returned to the puppet south Korean embassy in London on 4th February to protest against the latest round of repression against trade unionists and peace activists in the occupied south of the Korean peninsula. London comrades, including NCP leader Andy Brooks, took part in the Korean Friendship Association (KFA) demonstration together with other supporters of Democratic Korea to demand the release of all political prisoners in south Korea, and an end to the suppression of labour movement and pro-unification forces.
Posted by london communists at 4:33 pm No comments: