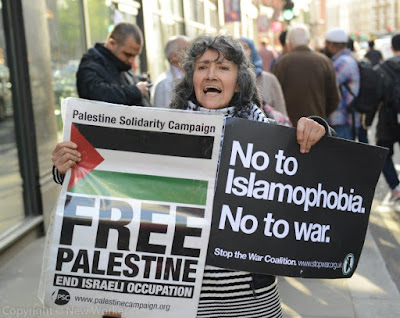 SCORES of people gathered in Whitehall on Friday 15th May and in Kensington High Street, opposite the Israeli embassy on Saturday 16th May to mark Nakba Day.
To Palestinians Nakba Day is Catastrophe Day – the day on 15th May 1948 when thousands of Palestinians were attacked, massacred and brutally driven from their homes into refugee camps to create the new State of Israel.
They have never been allowed to return to their homes, in violation of international law.
The Nakba came just a month after the Deir Yassin massacre on 9th April 1948, when around 120 fighters from the Zionist paramilitary groups Irgun and Lehi attacked Deir Yassin near Jerusalem, a Palestinian Arab village of roughly 600 people.
The assault occurred as Jewish militia sought to relieve the blockade of Jerusalem by Palestinian Arab forces during the civil war that preceded the end of British rule in Palestine. The residents resisted the attack, and the village fell only after fierce house-to-house fighting.
One-hundred-and-seven villagers were killed during and after the battle for the village, including women and children — some were shot, while others died when hand grenades were thrown into their homes.
Several villagers were taken prisoner and are believed to have been killed after being paraded through the streets of West Jerusalem.
This year in Britain there were Nakba commemorations in many towns. In London people gathered outside Downing Street on Friday 15th and outside the Israeli embassy on Saturday 16th in a noisy and colourful protest.
In Kensington a very small group of Zionist counter protesters was moved further along the street by police.
Posted by london communists at 11:38 pm No comments:

Thank you for the victory!

“SPASSIBO za pobedu!” (Thank you for the victory) and “Slava geroyam” (glory to the heroes) were the chants that rang out loudly from hundreds of Russian voices in south London on Saturday 9th May. 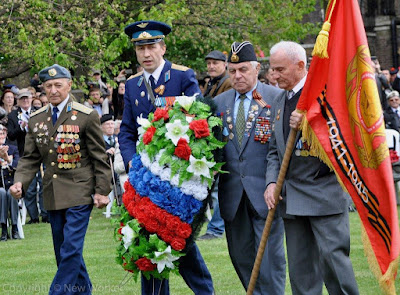 They were saluting Russian and British veterans of the Second World war at a massive ceremony at the Soviet War Memorial in Geraldine Mary Harmsworth Park last Saturday, 9th May, to celebrate the victory of the Red Army over the military might of Nazi Germany – and to remember the 27 million Soviet citizens who lost their lives in that titanic clash.
This is an annual event but this Saturday was special as it marked the 70th anniversary of the end of that terrible war and coincided with a massive grand parade in Moscow, which included a “March of the Immortals” – hundreds of thousands of people marching through Red Square carrying photographs of family members who had given their lives to defend the Soviet Union against the Nazis.
Most of the crowd came from London’s Russian community but it was a very mixed assembly. There were veterans of that war from Britain and a large party who had come from Russia.
There were local dignitaries and ambassadors from many of the former Soviet republics and this year for the first time a delegation from the embassy of the Democratic People’s Republic of Korea led by the ambassador Hyon Hak Bong.
There were people from Second World War re-enactment groups in authentic Soviet uniforms.
And there were communist, socialist and friendship groups, including for the first time Alain Fissore and Stefano Rosatelli from the London section of the Italian Partito Communista, CND veteran Bruce Kent – and of course a group from the New Communist Party led by general secretary Andy Brooks.
The event opened with welcoming speeches from the local mayor and the Government, represented by the Admiral Lord West of Spithead, who is Britain’s Admiral of the Fleet, who gave a surprisingly good anti-war speech. “No one who has taken part in war ever wants it to happen again,” he said. And he paid tribute to the achievement of the Red Army in defeating the greater part of the Nazi war machine.
The Russian ambassador, Alexander Yakovenko, presented new 70th anniversary medals to a group of Soviet veterans living in Britain and to British veterans of the Russian convoys, including members of the RAF 151 Wing who travelled aboard the first convoy to Russia in 1941.
It was at this point that the cheering and chanting began, loud and strong, in praise of the heroes, thanking them for saving the world from Nazism and it continued at intervals throughout the rest of the ceremony, especially when the veterans laid their wreaths.
A Russian Orthodox Archbishop sang a prayer – supported by a small group of choristers with deep and resonant voices.
Then there was the laying of over 70 wreaths, including by Hyon Hak Bong and by Andy Brooks.
Aksinia Elovik, a student at the Russian Embassy School in London sang a beautiful peace song; there was the Last Post, the Exhortation and the two-minute silence.
The formal part of the ceremony finished then and the Russian Ambassador invited everyone to join him in a toast to victory – at the nearby marquees where vodka, wine and Russian food were waiting.
And that was the start of a party of singing, dancing and reminiscing that lasted for hours.

Posted by london communists at 4:39 pm No comments:

The struggle against fascism in Greece 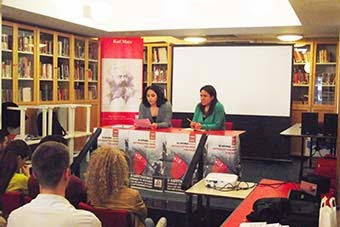 THE HALL of the Marx Memorial Library in central London was packed out on Saturday 9th May  for a meeting on Victory Day and the defeat of fascism in 1945, organised by British Section of the Communist Party of Greece (KKE).
A documentary produced by KKE was shown, recalling the heroic struggle of the ELAS partisans, led by the KKE, which ended in the defeat of German forces, without outside intervention, in October 1944.  It also covered the tactical errors which left the KKE exposed to a brutal onslaught by British and Greek royalist troops in the Battle of Athens in December 1944 and the civil war that raged from 1946-1949.
Ioli Gkouma of the KKE introduced the evening meeting with a talk which also analysed the role of the fascist Golden Dawn party. A lively debate followed on the lessons of the Second World War in Greece and elsewhere, the rise of Golden Dawn and the resurgence of fascism in Ukraine, eastern Europe and the Balkans backed by US-Nato imperialism. Alex Gordon, chair of the Marx Memorial Library, welcomed the participants to the library and joined in the debate, as did Theo Russell who also brought greetings on behalf of the New Communist Party of Britain.
Posted by london communists at 3:48 pm No comments:

Meanwhile Judge Mawrey is calling for a change in the law. He is convinced that only four local residents came forward against Rahman because of widespread intimidation. He wants the police to be able to act against an elected mayor without any complaints being lodged, “as a way of protecting democracy”.
“Police forces can and do act when evidence is presented to them of electoral wrongdoing but they do not have the resources to be pro-active and they remain heavily dependent on information supplied by the political rivals of the alleged wrongdoers. The Petition system is obsolete and unfit for purpose. It is wholly unreasonable to leave it to defeated candidates or concerned electors, like the present Petitioners, to undertake the arduous and extremely expensive task of bringing proceedings.”
Posted by london communists at 6:09 pm No comments:

May Day in London

THOUSANDS of people assembled in the windy spring sunshine on Clerkenwell Green last Friday for the annual May Day parade and rally organised by the South and Eastern Region Trade Union Congress.
The green was packed with trade unionists of all shades, members of left, socialist and communist parties with the usual big and colourful turnout from London Turkish and Kurdish communities.
A great throng of activists were greeting old friends, catching up with news and debating the coming general election and the need for a revolutionary strategy.
The Marx Memorial Library, in Clerkenwell Green, had opened its doors and offered tours of the historic building, where Lenin, in exile in London, had edited Iskra.
The extensive archives in the basement contain rare and old copies of some of the first ever trade union and socialist publications along with their modern counterparts.
There were strong contingents with banners from RMT, Unite, Unison, GMB, PCS and the Prison Officers Association and a jazz band led the march through Holborn, Archway, and the Strand to the rally in Trafalgar Square.
The New Communist Party Central Committee banner was there among hundreds of other red banners and flags and NCP comrades made good sales of the New Worker.
One group of RMT members joined the march as it passed the headquarters of the company Sodexo in Southampton Row where they had been holding a protest picket in support of sacked union organiser Petrit Mihaj.
Petrit Mihaj worked for global outsourcing giant Sodexo for 10 years, working in the catering department on Sodexo’s contract with London Underground.
Following a high-profile campaign to organise the workforce, Petrit was subjected to disciplinary action and was eventually dismissed.
The union successfully brought tribunal claims on his behalf, establishing that Petrit had been unfairly dismissed for his trade union activities. Despite the wins in the employment tribunal, union-busting Sodexo refused to reinstate or re-engage.
As the marchers entered Trafalgar Square they were handed paper plates painted red and yellow to represent Van Gogh sunflowers by workers at the National Gallery who are striking against privatisation plans and for the reinstatement of their union rep, Candy Udwin, who has been suspended.
She was one of the many speakers at the rally who included TUC assistant general secretary Paul Nowak, Steve Hedley of the RMT and Onay Kassab from Unite.
Posted by london communists at 5:50 pm No comments: