Down with the BBC lie-machine 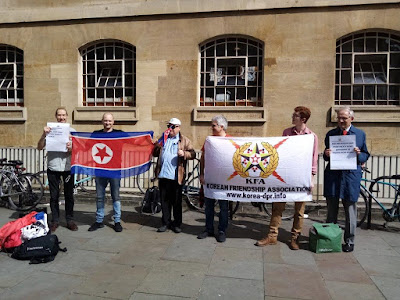 Theo Russell joined other Korean solidarity campaigners outside Broadcasting House on Saturday to condemn the BBC’s blatant bias against the Democratic People’s Republic of Korea (DPRK). The NCP London Organiser was taking part in a picket outside the BBC’s London HQ, called by the Korean Friendship Association (KFA), to highlight the BBC’s ongoing demonisation of Democratic Korea in its home and overseas broadcasts.
In 2017 the state broadcaster began a special Korean language service in a renewed imperialist propaganda campaign that targets the people’s government in north Korea.
Although the BBC poses as ‘impartial’ it uncritically repeats the anti-communist hysteria of the most reactionary elements of south Korean society, and the lies and smears of American Cold War warriors.
Posted by london communists at 12:10

We rely entirely on our readers to keep our presses rolling. That’s why the fighting fund is so important. Your donations keeps our suppliers happy, pay the wages of our full-timers and help maintain and expand the sales of the New Worker. Every pound counts in the struggle to keep our communist press rolling. Please send a donation to New Worker Fund, PO Box 73, London SW11 2PQ.

You can use your credit or debit card to make donations via our PayPal  account on our national website here: http://www.newworker.org/ncpcentral/fightingfund.html

You can also use your credit or debit card to take out a subscription to the New Worker. Check it out: http://www.newworker.org/ncpcentral/nwsubs.html

You can check when the paper was posted and when you can expect to receive it here:
http://newworkerservicestatus.blogspot.co.uk/
Posted by london communists at 8:19 pm No comments:

MILLIONS of Russians took to the streets last week to celebrate Victory Day and the surrender of the Third Reich on 9th May 1945. Every year, the Russian Federation celebrates the defeat of Nazi Germany with parades and processions across the country including Moscow, where a massive parade in the capital showcased modern Russia’s military might.
Similar tributes to the millions of Soviet soldiers and citizens who died in the struggle to defeat the Nazis in the Second World War were held in much of the former Soviet Union, western Europe and the rest of the world.
In London, New Communist Party leader Andy Brooks joined veterans, diplomats and local dignitaries at the ceremony that’s held every year at the Soviet War Memorial in the shadow of the Imperial War Museum in south London.
Hundreds of people, including many from the Russian community in London, gathered around the Memorial in Geraldine Mary Harmsworth Park in Southwark on Thursday 9th May to mark the 74th anniversary of the Allied victory over fascism in 1945.
British, Soviet and Norwegian war veterans marched to the monument to start the act of remembrance that was opened by Catherine Rose, the Mayor of Southwark, and addressed by Philip Matthews from the Soviet Memorial Trust Fund and Russian Ambassador Alexander Yakovenko.
This was followed by the laying of floral tributes by Southwark councillors, diplomats from the countries of the former Soviet Union, British and Soviet veterans, and friendship associations.
Officials from the Marx Memorial Library, the NCP and other communist movements laid their wreaths and flowers at the memorial that was unveiled on 9th May 1999. This was followed by the solemn Soviet lament, The Final Chord, sung by the choir of the Russian Embassy school in London, the Last Post and two minutes silence to remember those who gave their lives in the struggle for freedom during the Second World War.
Finally the Russian ambassador invited everyone to join him in a toast to victory at the nearby marquees where vodka, wine and Russian food awaited them.


Many then went on to Trafalgar Square to join the ‘Immortal Regiment’ parade, called by the Russian community in Britain to honour those that fell in the fight against fascism that is called the Great Patriotic War in most of the former republics of the USSR.
Londoners, including many members of the Russian ex-pat community, held portraits and Soviet emblems as they remembered those who had died in the Second World War, including veterans, partisans, concentration camp victims and home-front workers.
Starting in Trafalgar Square the parade moved on to Westminster shouting 'Ura!' and singing Russian war-time favourites such as Kalinka and Katyusha. Both young and old joined the rally, complete with signs and banners showing to all Londoners the history of the Great Patriotic War.
RAF veteran Gareth Fearn told the Russian media that he joined the rally to support his girlfriend but also said that it was important to commemorate those who served in the Red Army for their sacrifices.
"I attended to support my girlfriend but also I served in the Royal Air Force.
“I think it's unimportant which country you're from. I think it's important to remember all of those who served in the war regardless of which side they served on.
"I think it's important to celebrate not just on 9 May but on every type of Remembrance Day, and I think it's important to continue that from generation to generation because if we didn't, we'd be living in a very different world. If it wasn't for these people, we'd be living in a different world today.”
Another marcher dressed in Soviet uniform said that Remembrance Day was important to remember and held deep meaning for his family.
"It's our Remembrance Day. My great-grandfather died in this war and it holds a lot of meaning for us. As soon as people forget one war, another will happen after that."
Posted by london communists at 5:59 pm No comments:

Better Angels at the Chinese Embassy 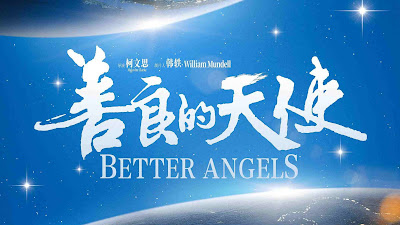 People’s China and the USA are locked into a trade war that effects the day-to-day lives of millions of Chinese and American workers. Nobody knows how it will all end but a mutually beneficial way forward is charted out in a documentary that was shown last week at the Chinese embassy in London.
The thaw in Sino-American relations began during the ‘ping-pong’ diplomacy of the Nixon era. The US leader would end decades of confrontation when he met Mao Zedong in 1972.
The film begins with a warning from Richard Nixon’s foreign secretary, the now 95-year-old Henry Kissinger, declaring: “If we are to clash, it would be a disaster for the whole world.”
Better Angels is a documentary focusing on Sino-American relations seen through the eyes of major players and ordinary people on both sides of the Pacific Ocean.
Nearly 100 people from all walks of life joined Chinese diplomats at the screening of Better Angels and the reception, jointly organised with the Asia House business forum. They included Chinese diplomats Chen Wen and Ma Hui from the Chinese Embassy in London, along with the film’s director, British born film-maker and two-time Oscar winner Malcolm Clarke.
Chen said in her speech that Better Angels, which was filmed over five years across four continents, touched the audience with stories of ordinary Chinese and Americans, and revealed the wisdom and hope for Sino–US relations. She shared her views on how to achieve understanding and trust between big countries. First, “we should bridge over mysteries between cultures” she said. "We could bring our people together and cement public support for our bilateral relations."
Second, we should tear down the wall of prejudice and misgivings, and engage in consultation and cooperation in the spirit of mutual respect, openness and friendship.
Third, guided by Xi Jinping ‘Thought on Diplomacy’, we should build a community with a shared future for humankind and blaze a new path of state-to-state relations by building a new type of international relationship featuring mutual respect, fairness, justice and win–win co-operation.
Forty years have passed since China and the USA established their diplomatic relations. The past experience and enlightenment of Sino–US relations show that the co-operation between the two countries will benefit not only the two nations but also the whole world.
After the screening, Director Malcolm Clarke answered questions from the audience. He said that China has a long history and a splendid civilisation. In its 40 years of reform and opening up, China has created a “miracle of development”. There is always an "information deficit" between China and the West however.
Not everyone can appreciate China’s development, and the extraordinary and far-reaching significance of the “Chinese miracle”. He hoped that this film would reduce the misunderstanding of China, and that more good films showing the true Chinese image and the story of ordinary Chinese people would appear in the future.
The audience, marvelling at China’s achievements, said that the world now needs to know more about China.
Posted by london communists at 11:25 am No comments:

Thousands march for Palestine in London 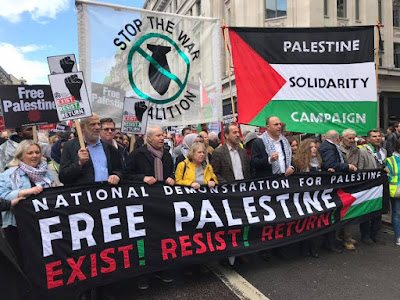 Ten-thousand people marched through London on Saturday to show that the Palestinian people are not alone in their struggle for freedom, justice and equality. Ahed Tamimi, the Palestinian teenager jailed for eight months for slapping an Israeli soldier who was trespassing on her family’s property, led the march along with Labour MPs, trade union leaders and Palestine solidarity activists.
The demonstration, called by the Palestine Solidarity Campaign and the Stop the War coalition, was held during the  run-up  to Nakba Day (Catastrophe Day) – which Palestinians and other Arabs commemorate on 15  May to remember nearly a million Palestinians who were driven out of their homes by the Zionist militias when the State of Israel was established in 1948.
At the rally in Whitehall Palestinian ambassador to the UK Dr Husam Zomlot stood on the stage next to Ahed Tamimi, to tell a cheering crowd: “I see British people from the left, from the right, from across the board. You know why? Because this is not a fight between left and right, it’s a fight between right and wrong.”
Ahed Tamimi said she refused to be defined as a victim, she was a freedom fighter. Richard Burgon, the Labour MP, said: “Palestine has the right to exist but sadly that is a right that is increasingly threatened … Palestinians should be able to live free from ever expanding settlements on stolen land.”
Posted by london communists at 11:15 am No comments: