NATO and the crisis in Ukraine 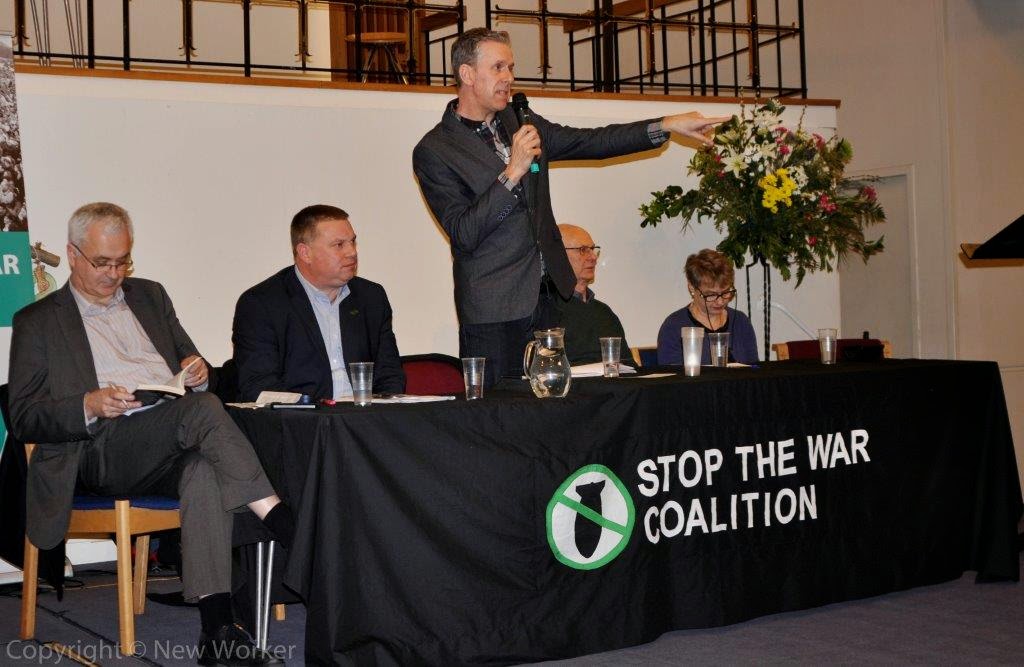 ANTI-FASCISTS and peace campaigners packed the Baptist Central Church in Bloomsbury on  Thursday 19th March for a meeting organised by Stop the War to examine the role of Nato in the current crisis in Ukraine.
Speakers included Jonathan Steele former [Guardian] journalist, Andrew Murray chief of staff Unite the Union, Kate Hudson CND general secretary and Alex Gordon RMT and leader of Solidarity with Anti-fascist Resistance in Ukraine.
All the speakers emphasised that Nato interventions were behind the coup a year ago in Ukraine that brought to power a government that included open Nazis who now dominate that government, not but numbers but by aggression and terror.
They all agreed this was part of a long-term US strategy to surround Russia with a hostile military presence and destabilise Russia in order to achieve US global hegemony.
Jonathan Steele rather naïvely claimed that the fall of the Soviet Union had brought an end to the threat of nuclear war, which he said, has now been resurrected by Nato.
None of the speakers was pro Putin but they did point out that all the measures the Russian government has taken have been justifiable self-defence actions.
Alex Gordon made a very strong speech, detailing the rise of neo-Nazism in Ukraine and other European countries, for example Golden Dawn in Greece, Pegida in Germany and the legalisation of pro-Nazi symbols and public events in the Baltic States.
He also attacked those who are trying to revise history to make it appear that the Soviet Union was the aggressor in the Second World War and that Germany was the victim.
There was a lively debate, which included allegation of imperialist aggression against Putin and a complaint from some Latvian students present that it was hypocritical of Alex Gordon to complain at the legalisation of the swastika in Latvia while the hammer and sickle is legal here.
Alex Gordon made a very robust reply to this, condemning anyone who would try to make an equivalence between the Nazis and communism when the Red Army played the major role in defeating the Nazis.
Posted by london communists at 8:45 pm No comments:

Standing up to racism


MORE THAN 10,000 anti-racists and anti-fascists from a very broad range of trade unions, community groups and political groups came together in London on Saturday 21st March to take part in the Stand up to Racism demonstration, which marched from Portland Place to a rally in Trafalgar Square.
Stand up to Racism (SUR), an umbrella group of 12 organisations including Unite Against Fascism, the Muslim Council of Britain, and Stop the War, organised the event it London as part of a worldwide United Nations Day of Action Against Racism. 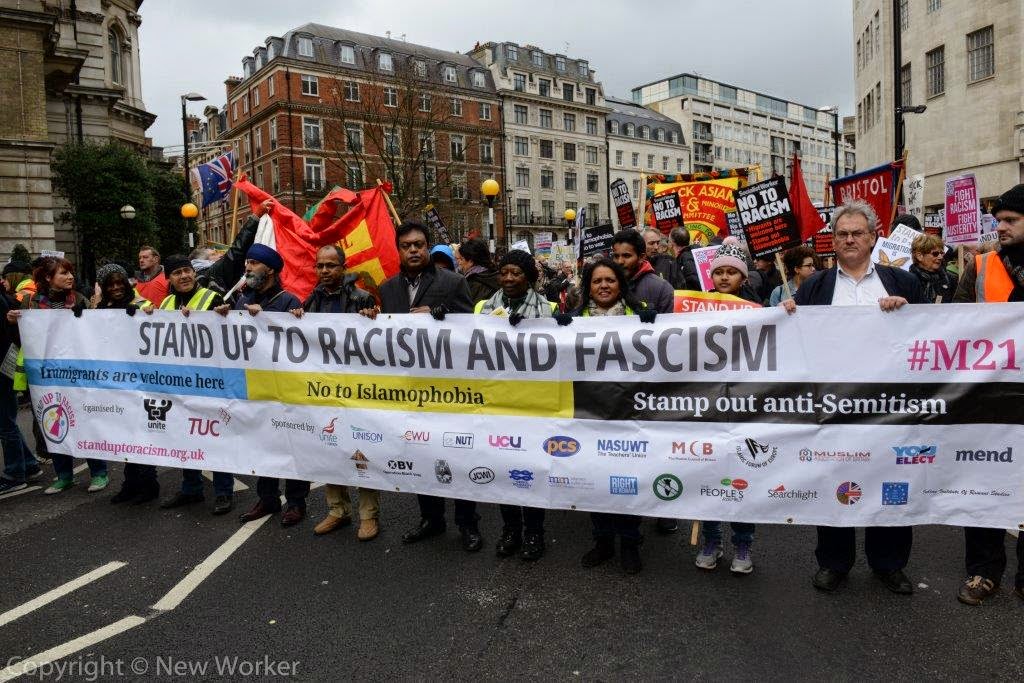 The main themes of the march were: “Stand up to Racism”, “No to Islamophobia”, “No to Anti-Semitism”, “Black lives Matter”, “Muslim Lives Matter” and “No Human Being is Illegal”.
Teaching unions were out in force along with branches of Unite, Unison, GMB, PCS, RMT and others. The ubiquitous RMT Paddington Number One banner was there. And many unions helped by providing volunteer stewards. But there was a sad absence of national leadership banners from the unions.
There were parallel marches in capitals across Europe and around the world. UN Anti-Racism Day commemorates the victims of the Sharpeville massacre in 1960, when 69 peaceful protestors against apartheid were killed by South African police.
Diane Abbott MP, who spoke at the rally, said: "A wave of ugly immigrant-bashing racism is sweeping through Britain, led by UKIP, pandered to by the media and conceded to by many others.
“This demonstration is the start of the fight back. We have to gather everyone willing to stand up to racism."
Maz Saleem, daughter of the late Mohammed Saleem will also attend. She spoke out about her father's death: "My father Mohammed Saleem was brutally murdered on the 29th April 2013 by a right-wing terrorist purely because he was a Muslim, not because he was Asian but because of his faith.
"Islamophobia is rife and Islamophobic attacks continue to rise fuelled by sensationalised headlines run by media and also by the Government’s stance on treating all Muslims as terrorists."
The march encountered a small counter protest staged by the neo-Nazi Britain First group, huddled in Piccadilly Circus and protected by a large phalanx of police. They had previously peppered the area with stickers saying “anti-racism is code for anti-white”.
The marchers’ response was an overwhelming chant of the slogan: “There are many, many more of us than you. We are black, white Asian and we’re Jew. There are many, many more – many, many more – there are many, many more of us than you – and we’re gay!”
Posted by london communists at 11:33 pm No comments:

Dolce and Gabbana accused of homophobia

By New Worker correspondent
THE OUT and Proud Diamond Group and the Peter Tatchell Foundation last week led a protest outside London’s West End Dolce and Gabbana in Bond Street after Stefano Gabbana and Domenico Dolce described the children of gay couples and those born from IVF treatment as “synthetic children”.
Speaking to the Italian magazine Panorama, alongside his business partner, Stefano Gabbana, Domenico Dolce said children should be born to a mother and a father: “The only family is a traditional one.
“I’m not convinced by those I call the chemical children, synthetic babies...They are wombs for hire, semen chosen from a catalogue ... psychiatrists are not ready to confront the effects of this experimentation.”
Stefano Gabbana added: “The family is not a fad.”
In 2006, he told the Daily Mail: "I am opposed to the idea of a child growing up with two gay parents." Both designers have in the past strongly opposed same-sex marriage.
Gay rights campaigners are now calling for a worldwide boycott of the high fashion Dolce and Gabanna shop chain.
LGBT (Lesbian, gay, bisexual and transgender) rights and human rights campaigner Peter Tatchell, Director of the Peter Tatchell Foundation and co-organiser of Thursday’s protest, said: "It is hypocritical for Stefano Gabbana to oppose gay parents, given that in 2006 he expressed a desire to have a child via artificial insemination and surrogacy.
“He's guilty of double standards. Gabbana wanted for himself what he now condemns other gay men for wanting.
"These comments are not only an attack on same-sex parents but on all parents who've had children with the aid of fertility treatment, including thousands of heterosexual couples.
"Dolce and Gabbana are echoing ill-informed, outdated and homophobic prejudices about gay parents. Research spanning 40 years shows that children bought up by gay mums and dads are just as happy and well-adjusted as those from traditional heterosexual families.
“The key to a child’s welfare is the love of their parents, not the parents’ sexual orientation. They are playing into the hands of the Vatican and far right political parties that oppose gay families,” said Tatchell.
Co-organiser of the protest, Edwin Sesange, director of the LGBT Out and Proud Diamond Group, added: “Please join us in sending a clear message to Dolce and Gabbana that same-sex families are loving, happy families.
“This issue is not about same-sex families alone but also about the many straight families who have benefited from fertility treatment. Dolce and Gabbana’s statements add to the stigma, shame, prejudice, rejection and intolerance often suffered by same-sex parents and their children. They should withdraw their statements and apologise.”
Posted by london communists at 11:28 pm No comments: 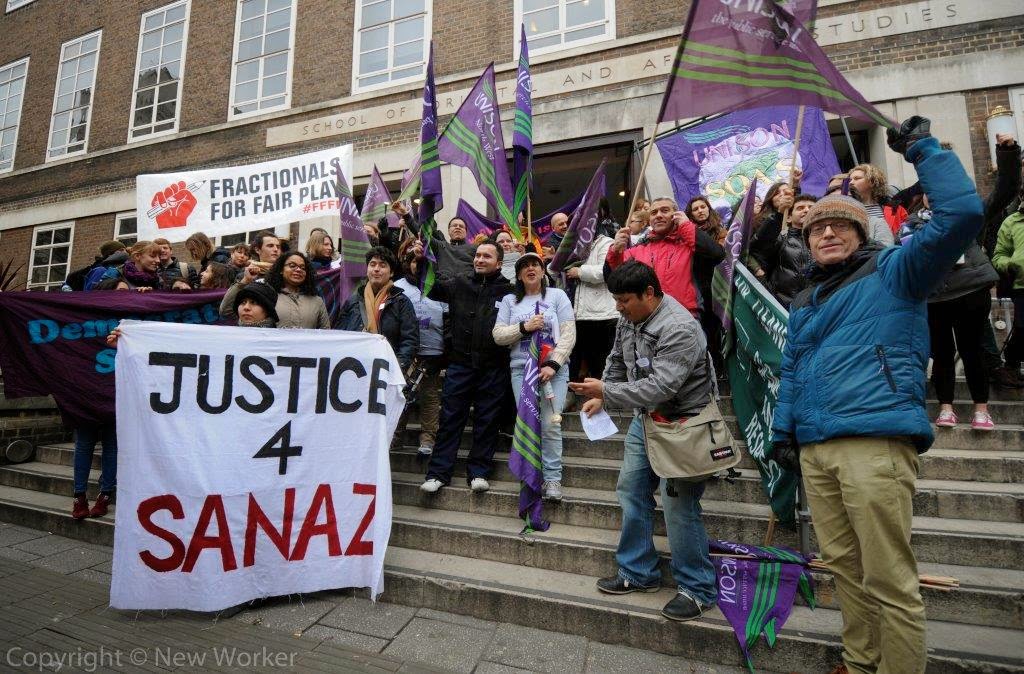 CLEANERS at the University of London’s School of Oriental and African Studies (Soas) last year won a long battle for decent wages and terms and conditions.
Last week they were out on strike again, supported by their union Unison, as ISS broke the terms of that agreement by announcing that new vacancies will not be given to cleaning staff already employed in Soas.
ISS also demands that new staff must be fluent in English. Most of the Soas cleaners are immigrants and are not fluent in English but have worked there for many years, some for 18 years.
The cleaners are calling for lessons in English and insisting that new workers should not be employed on worse terms and conditions than those agreed by ISS last year.
They are angry that ISS has begun trying to recruit new workers on worse terms and conditions, which is a breach of the agreement secured last year, and which will create a two-tier workforce.
Posted by london communists at 11:19 pm No comments:

AROUND 300 people took part in a march through the campus of London School of Economics (LSE) on Thursday 19th March, in support of a student occupation there of a room in the LSE’s Old Building. 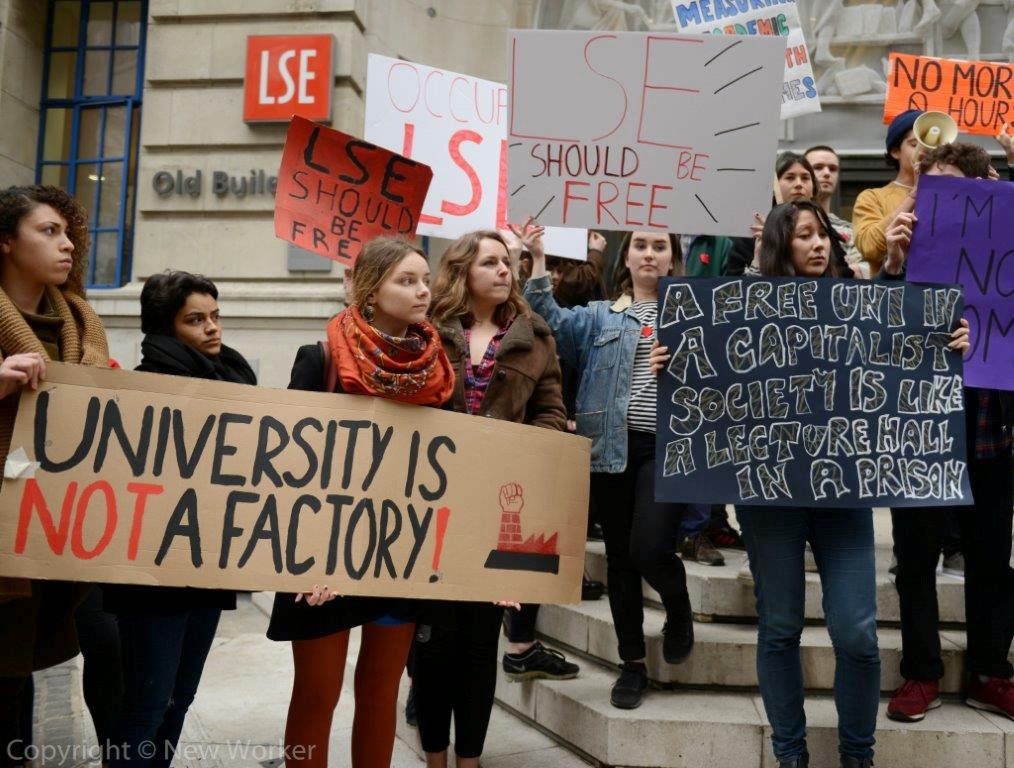 The students are campaigning for free higher education and lobbying the Government to scrap tuition fees.
They are also opposing counter-terror legislation, calling for an end to zero-hours contracts for university staff and for a boycott of companies that profit from trade with Israel’s occupation of Palestine.
The students marched through the campus and then held a sit-down protest outside the Royal College of Surgeons, where cleaners in the Unison union have been campaigning over pay.
The cleaners, who are mainly migrants, had joined the march with their Unison banner. And one of them spoke at the protest.
Posted by london communists at 11:17 pm No comments: