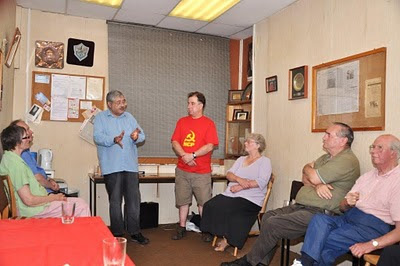 COMRADES friends joined New Communist Party leader Andy Brooks and Party Chair Alex Kempshall in celebrating the NCP's founding day reception on 10th July at the Party Centre in London. Michael Chant from the RCPB (ML) and Dermot Hudson from the UK Korean Friendship Association spoke of the NCP’s international solidarity and consistent work over the past 33 years in upholding the communist banner in Britain, while solidarity messages included greetings the Workers’ Party of Korea and from an old comrade who now lives in one of the former Soviet republics. No NCP social ends without an appeal for the New Worker and National Treasurer Dolly Shaer’s call raised £652 for the fighting fund!
Posted by london communists at 11:29 pm No comments:

Email ThisBlogThis!Share to TwitterShare to FacebookShare to Pinterest
Labels: NCPB 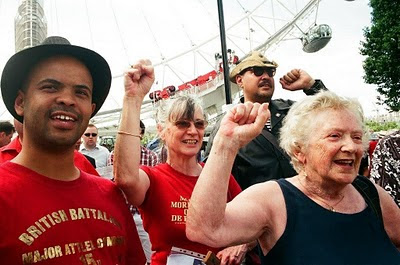 
WHEN the Spanish war against fascism ended in 1939, the International Brigaders gathered for a final rally before leaving with their heads held high and the words of Dolores Ibuarri (La Pasionaria) ringing in their ears: “You are history, you are legend”.
But some were left behind; suffering the horrors of incarceration in Franco’s fascist jails and their story is not yet well documented.
And remembering these forgotten heroes was the theme of this year’s memorial event in Jubilee Gardens in south London on Saturday 3rd July.
Scores of people gathered in the baking sun, many of them relatives of those who had volunteered to fight against fascism in Spain in 1936 because they could see that rising fascism threatened to unleash a cataclysm on the human race.
The event, organised by the International Brigade association, began with speeches from Ramon Ganderias, deputy head of mission at the Spanish embassy, and from Sr Miquel Caminal, director of Memorial Democratic de Catalunya.
This was followed by the singing of the song Jarama, a one-minute silence and then the laying of wreaths at the memorial statue.
Dolly West-Shaer, daughter of Brigader Frank West and New Communist Party Treasurer, gave an account of her family’s shock when Frank did not return with the other brigaders and the discovery that he was still held prisoner at a time when Europe was hurtling towards war against fascism.
The Franco regime was engaged in the wholesale slaughter of its prisoners of war but DN Pritt, a Labour Party leading campaigner and barrister, “practically sat on the Foreign Office doorstep in his fight to get the remaining prisoners home and Dad was one of the 11 who were the last prisoners to come home,” Dolly told the crowd.
And he came with a harrowing story of his eight months imprisonment in the derelict monastery, San Pedro de Cardenas. The place contained 700 International Brigaders as well as hundreds of Basque and Spanish prisoners, most of whom were killed.
Prisoners’ health suffered badly from the lack of food and medicine – many of them were wounded. The German Nazis sent SS officers to interrogate the prisoners. German members of the brigade were shipped back to concentration camps where few survived.
Further to this the prisoners suffered continual physical attacks from their sadistic guards.
But their spirits did not succumb. “They set up classes in chess, languages, philosophy, sciences and Marxism; they shared their experiences of life in the international working class,” said Dolly. “And they survived!
“And left us a period of working class history that we can all be proud of.”
Christine Collins gave the crowd in Jubilee Gardens an equally harrowing tale of the experiences of her grandfather as a prisoner of Franco’s forces.
The event finished with the emotional singing of the Internationale.
photo:Dolly Shaer salutes the memory of the Brigaders
Posted by london communists at 11:24 pm No comments: 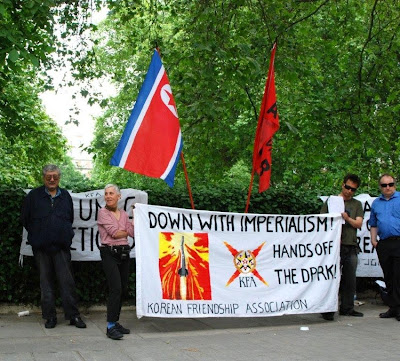 FRIENDS of the Korean people marked the 60th anniversary of the imperialist attack on the Democratic Peoples Republic of Korea with pickets outside the south Korean and US embassies last Friday. NCP leader Andy Brooks joined other comrades in the afternoon protests organised by the UK Korea Friendship Association, the Juche Idea Study Group and supporters of the Russian AUCPB communist party, which included the continuous reading out of Democratic Korean statements and solidarity messages outside both embassies by UK KFA organisers Kevin Cain and Dermot Hudson. Then everyone else was invited to take a turn on the megaphone to deliver their own messages of support for the Korean revolution.
Owen Liddle and Juan Zapata from the Metropolitan New Worker Supporters’ Group along with members of the Revolutionary Workers’ Party (Posadist) and the Revolutionary Communist Group helped in giving out leaflets to passers-by in the spirited and cheerful demonstrations which ended in Grosvenor Square with the playing of the DPRK national anthem.
Posted by london communists at 11:25 am No comments: