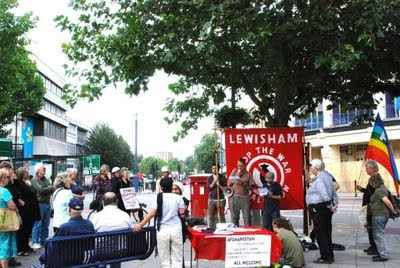 STOP the War campaigners gathered around Lewisham Clock Tower in south London last Saturday to mark the death toll of British troops serving in the futile and illegal war in Afghanistan passing 200.
Those present – individuals and representatives of a wide spectrum of progressive organisations – took turns to read out the names of the 206 dead British troops and a similar number of dead Afghan civilians.
The casualty rate among Afghan civilians is far higher than among the invading troops but it seems that no one is keeping records and the numbers and names of the dead are hard to find.
Most British reporters in the country are embedded with British troops and rarely get to interview the victims of British and American bombing raids.
A lot of information has been supplied by a London reporter, Guy Smallman, who has travelled to Afghanistan to make his own independent investigation. Even so information about many of the dead is patchy; some are known only as “Amin’s mother” or “Khan’s baby son”.
The ceremony attracted a number of passers by and shoppers who stopped to listen to the list of names being read.
The Stop the War campaign is planning a major demonstration against the continuing war in Afghanistan on Saturday 24th October in central London. It will be organised jointly with CND and British Muslim Initiative.
And for next months a coalition of trade unions – NUJ, NUT, UCU and PCS – have come together nationally with Stop the War Coalition and other campaigns to call a joint protest at the Labour Party conference in Brighton on 27th September 2009.
The continued deployment of troops in Afghanistan and Iraq together with the proposed replacement Trident nuclear programme cost billions of pounds that could be spent on jobs, education and public services for the most vulnerable in society.
Stop the War calls on the Government to prioritise spending on public services rather than war or weaponry.
Posted by london communists at 9:43 pm No comments:

TORY London mayor Boris Johnson last Tuesday declared the performance of the PPP company Tube Lines, contracted to upgrade the infrastructure of the London Underground, as “unacceptable”.
The public-private partnership (PPP) deal that was opposed by his predecessor, Ken Livingstone, but imposed by the Government is failing London’s travelling public.
Johnson said delays on a major underground railway route were "unacceptable" after doubts were raised that work on its upgrade would not be completed by its end of year deadline.
Tube Lines, and its key shareholder Bechtel, are carrying out a £500 million-upgrade of the Jubilee Line under the PPP deal.
The line has suffered full or part closures every weekend this year, causing havoc for commuters travelling to the busy Canary Wharf financial district and music-goers attending the O2 arena in Greenwich, south-east London.
"Tube Lines must get its act together if Londoners are to benefit from faster, more frequent and reliable services on the Jubilee Line," Johnson said. "I am hugely frustrated at their progress to date, which is simply unacceptable."
The mayor appoints the board of Transport for London (TfL), the body responsible for most of the city's transport system.
Tube Lines had initially promised to complete the work by June, and despite being one of London's newest Underground lines, it was granted an additional 12 weekends to meet its 31st December contractual deadline, (TfL) said.
Then in the summer, Tube Lines asked for another six weekends of closures. One weekend has been granted, but TfL is reluctant to grant the other five, saying it needs an independent review to restore confidence.
"Tube Lines' hunger for more Jubilee Line closures has stretched the patience of Londoners and business almost to breaking point," Johnson added. "Before we can consider any more disruption, we must have confidence they will deliver."
Financial penalties will kick in if the deadline is missed, adding up to several million pounds a month.
Posted by london communists at 9:37 pm No comments: