More tax cuts for the rich

PHILIP HAMMOND, the new Chancellor of the Exchequer, delivered his first Autumn Bud
get Statement today and revealed a £68.2 billion gap in the Government’s income that will have to be filled by borrowing over the next year — a debt to be gradually reduced through subsequent years, unless of course the future beings further unexpected problems. But next year Britain’s debt will be 90 per cent of our gross domestic product.

In spite of this and general falling income from taxes, Hammond granted businesses another fall in corporation tax from 20 per cent to 17 per cent. He admitted this was significantly lower than in other G20 countries and effectively prostituting Britain to international business as a tax haven.
He has also followed his predecessors in raising the threshold at which workers start to pay tax. As ever, this was claimed to be a great boon for the low paid. But these rises in thresholds work their way up through the earnings levels and benefit the wealthy far more than the poor — another hidden gift to the rich.
He praised his colleagues in Government for record levels of employment, a fall in the numbers of benefit claimants and “the lowest ever number of children being raised in workless households” but did not mention that this reveals that the growing numbers of families with children queuing up at food banks are increasingly people in work on wages that are too low to live on.
He did not mention the changes to Universal Credit that are looming but praised the system of “making work pay” that had been introduced by Labour. It is a system that benefits employers and allows them to pay scandalously low wages while the taxpayers put bread on the tables of those workers.
He admitted that productivity rates in Britain are low compared to other industrial countries, meaning that workers here have to work longer to create the same amount of wealth. And he admitted that this was due to low wages and poor investment in industry.
Hammond said: “Raising productivity is essential for the high-wage, high-skill economy that will deliver higher living standards for working people. I can announce today a new National Productivity Investment Fund of £23 billion to be spent on innovation and infrastructure over the next five years,” thus stealing an idea from Shadow Chancellor John McDonnell.
He raised the minimum wage from £7.20-an-hour to £7.50 — a rise of over £500-a-year for a full-time worker. But he now calls it the living wage. That term originally meant a wage not merely to scrape by on but to live a decent life with access to leisure and cultural activities, not a wage that leads to record household debt levels, chronic stress and the need to resort to food banks.
Nor did he mention the levels of Employment Support Allowance — with planned cuts put on hold from a unanimous House of Commons vote last week, which alas, had only an advisory status. So presumably the planned cuts will go ahead. But he did say there would be no further welfare cuts during this Parliament.
He acknowledged we have a housing crisis and announced plans to make a lot more public land available for building houses — by selling it off to private developers to build “affordable” homes. The enclosure movement continues.
Hammond also plans to extend the right-to-buy to housing associations — a move that will sink many of them as their tangible assets, against which they borrow, start to disappear. Over all, these measures will increase the housing crisis.
One odd pledge he made was to provide a £7.6 million grant for the restoration of Wentworth Woodhouse, a stately home near Rotherham in South Yorkshire, that is said to have been the inspiration for Jane Austen’s Pemberley in Pride and Prejudice. He claimed it was threatened by nearby opencast mining authorised by a previous Labour government.
If he thought this would make the population of the North of England feel less neglected by Government spending, the Tory leadership is even more out of touch with this planet than we suspected.
Hammond finished by saying this would be his first and last Autumn Budget Statement — from now on there will be just one full Budget every year, which will be in the autumn. There will be a Spring Statement every year but this will reiterate and update changes made in the full Budget but not introduce any significant changes.
Posted by london communists at 7:16 pm No comments: 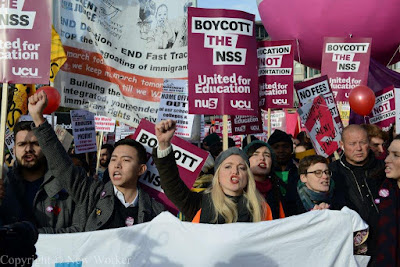 
MORE THAN 15,000 students, lecturers and college workers marched through London last Saturday  from Park Lane, past the Houses of Parliament, to Millbank to demand free, quality further and higher education, accessible to all.

Their key demands were:

The National Union of Students’ (NUS) protest was actively supported by the college lecturers’ union UCU in response to what the NUS says is the wake of the biggest attacks to the education sector in modern times.
The union estimated this was the biggest student protest in London for years. Approximately 60 coaches brought students from across Britain, with a special mention going to Orkney College, whose students set off at 4am the previous day from the Northern tip of Scotland and travelled over 700 miles to take part.
The march concluded with a rally at Millbank featuring rousing speeches from Sally Hunt (general secretary, UCU), Labour leader Jeremy Corbyn, TUC general secretary Frances O’Grady, Amelia Womack (deputy leader of the Green Party), NS President Maila Bouattia and other student leaders,and Darletta Scruggs, a Chicago-based activist from the Black Lives Matter movement.
They delivered the message that free, good quality education is a right for all, regardless of ability to pay and more than at any time before we have to fight for that.
FE colleges have been cut to the core, with huge job losses and course closures, and a desperate need for investment that simply isn’t being provided.
In higher education (HE), tuition fees are rising and the Government is forcing universities to run like businesses. Students are facing higher debt than ever before with maintenance grants and NHS bursaries scrapped, student loan terms changed and tuition fees set to reach £12,000 by 2026.
They protested against Government plans in the Higher Education Bill for an ideologically led market experiment that would open up HE in Britain to the likes of Trump University and leave students facing escalating fees.
Before the march Professor Stephen Curry, a structural biologist from Imperial College London, wrote in the Guardian: “The Higher Education and Research Bill has to be amended before it undermines the autonomy and vitality of our universities and the UK research base.”
Earlier in the week the Government tabled amendments to the Bill but failed to address critics’ key concerns relating to private providers and fees. The Bill will introduce a teaching excellence framework that will rank universities by quality and allow the best-performing institutions to raise their fees in line with inflation.
The proposals will also make it easier for new institutions, including for-profits, to gain a university title – a label that can significantly boost applications from overseas students and that currently takes decades to achieve.
Malia Bouattia said the plans would damage quality and leave students in even more debt: “The Government is running at pace with a deeply risky, ideologically-led market experiment in further and higher education, and students and lecturers, who will suffer most as a result, are clear that this can’t be allowed to happen.
“This week, before the Bill has even been properly debated in Parliament, let alone passed, universities are already advertising fees above £9,000.”
Posted by london communists at 5:24 pm No comments: 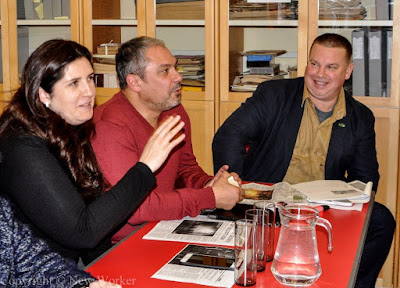 by New Worker correspondent
TWO YOUNG Ukrainians, one a journalist and the other a lawyer who acted as interpreter, addressed a packed meeting in the Marx Memorial Library last Friday evening, the 18th November, on living conditions in Ukraine today.
They reported that the economy is in a state of chaos, with soaring prices and rents that exceed the total income of pensioners. Levels of poverty and absolute destitution are rising fast.
The current government that was brought to power by an illegal coup in February 2014 is tied to the neo-liberal policies dictated by the International Monetary Fund (IMF) and the World Trade Organisation (WTO).
They described its policies as “social genocide”. “All the reforms that have been conducted in Ukraine during recent years were aimed exclusively at the liquidation of the socialist gains and the restoration of capitalism,” the journalist said.
They reported that the Communist Party of Ukraine had been banned for no legitimate reason and that the party was fighting this ban through OSCE (Organisation for Security and Co-operation in Europe) and the European Court of Human Rights.
All communist symbols are now outlawed and it is illegal to say anything at all positive about the Soviet years in Ukraine.
This has led to the vandalism of war memorials to Red Army soldiers that is unchecked by the government.
They also reported that it gave them great hope and encouragement to learn of protests in London and other western cities against the illegal regime in Kiev and the banning of the communist party there.
Posted by london communists at 5:13 pm No comments:


THE LONDON Borough of Lambeth, a Labour council, is planning to bulldoze an entire estate in Upper Norwood and then build new homes. These new homes will be for sale to the private sector and the council claims it will then use this revenue to build new homes for the existing tenants.
The Central Hill estate was built between 1966 and 1974, and provides more than 450 homes.
Lambeth’s Cabinet Member for Housing, Matthew Bennett, claims that too many homes suffer from damp, mould and disrepair. Too many homes have problems with their drains, the kitchens and bathrooms are dilapidated and need replacing, roofs and water pipes leak. Many families are living in overcrowded conditions in homes that are just too small.
The residents, who are campaigning as Save Central Hill, claim that the council has totally neglected the estate and allowed it to fall into serious disrepair. But they say that a renovation and repair project will be much cheaper and less disruptive to their lives than demolishing the estate and replacing it with luxury homes that they will never be able to afford to live in.
Save Central Hill says that: “The people who live on the estate will lose their current homes, tenants will lose their secure tenancies and leaseholders will be forced out as the new properties will not be affordable. The community will be destroyed. The impact on the local area will also be significant as Lambeth plan to at least double the number of homes on the estate. “
Posted by london communists at 5:06 pm No comments: