For peace in Korea

by New Worker correspondent
Friends of Korea returned to the Marx Memorial Library last weekend for a solidarity meeting to discuss the current efforts for peace and reunification that have taken place on both sides of the divided peninsula since Korean leader Kim Jong Un’s historic talks with Donald Trump, the leader of US imperialism in Singapore in June.
The meeting, called by the Friends of Korea committee, was opened by NCP leader Andy Brooks who welcomed everyone in the hallowed hall whose boards had, as he said, once been tread by Harry Quelch and Lenin.  Michael Chant from the RCPB (ML) followed with a talk that focused to the current efforts for peace by the people’s government in the north and the new southern administration and the need to raise the question of peace on the streets of Britain in this, the hundredth anniversary of the end of the first world war.
This was followed by Dermot Hudson of the Korean Friendship Association (KFA) who spoke about his recent visit to Democratic Korea and the giant strides that the people’s government is taking at home and abroad for the cause of peace and socialism.
The panel then took part in a wide-ranging discussion that covered all aspects of the campaign for peace in Korea in Britain and across world. The meeting ended with the adoption of a solidarity message to Korean leader Kim Jong Un and the people of the Democratic People’s Republic of Korea supporting the right of the Korean people to self-determination, independence and peace that was adopted by acclaim.
The Friends of Korea committee consists of the New Communist Party of Britain, Revolutionary Communist Party of Britain (ML), Socialist Labour Party, European Regional Society for the Study of the Juché Idea and the UK Korean Friendship Association. Meetings are open to all friends of the Korean revolution and the committee organises events throughout the year which are listed by the supporting movements and on the Friends of Korea blog.
Posted by london communists at 8:10 pm No comments:

By New Worker correspondent
NCP leader Andy Brooks joined hundreds of Greek and Cypriot communists celebrating the glorious 100-year-old history of the Communist Party of Greece (KKE) at a meeting in London last weekend. Wood Green’s Cypriot Community Centre hall was packed to the rafters on Saturday to see a video tribute to the KKE that was founded in 1918 and hear an report of the current situation in Greece by Tilemachos Dimoulas, a member of the Politburo of the Central Committee of KKE.
The KKE was founded amid the flames of the October Socialist Revolution of 1917 .  From the very first moment of its foundation in 1918, the KKE stood unwaveringly as an advocate and defender of the Soviet Union, it opposed the Greek bourgeois class which along with others on an international level, tried to supress the October revolution at its birth.
Fourteen capitalist states participated in the imperialist intervention against the Soviet Union, with capitalist Greece being among them. The KKE called upon the Greek people to condemn and oppose the imperialist intervention. From its founding Congress, it addressed
a protest resolution for the intervention of the imperialists against the young Soviet power. The Greek communists of Odessa distributed proclamations to the population and the Greek troops, which called upon the workers not to turn their guns against their class brothers but
against the real enemy, the imperialists.
Opposing dictatorship at home and supporting the fight against fascism in Spain the KKE took up the gun to fight the Nazis during the Second World War and fought  the royalists and their Anglo-American backers during the post-war civil war.
The KKE is at the forefront of the effort for the revolutionary regroupment of the International Communist Movement, the effort of creating a Marxist-Leninist pole in the international movement. After the fall of the Soviet Union in 1991  the Greek communists took important initiatives in order to rally the communist forces from all over the world, to organize the international meetings of communist and workers’ parties that began in Athens in the 1990s. Today the KKE keeps up the fight  against austerity and the European Union to defend workers rights to build the revolutionary movement in Greece and throughout the world.

Posted by london communists at 8:04 pm No comments: 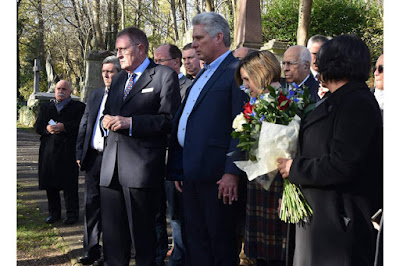 Cuban leader Miguel Diaz-Canel paid tribute to Karl Marx at a ceremony at the Marxist thinker’s tomb in Highgate last week. The Cuban president, who was making a stop-over in London following his talks in China, Democratic Korea, Laos and Vietnam, also took the opportunity to hold talks with Jeremy Corbyn and members of the government.
“We honour one of the great thinkers of humanity, Karl Marx, in his grave at the Highgate Cemetery, for Cuba in the bicentennial year of his birth and the 135 anniversary of his physical absence,” the Cuban president said.
During his short but busy stay Diaz-Canel held talks with Chancellor Philip Hammond, Labour leader Jeremy Corbyn and members of the Cuba Solidarity Campaign. The Cuban leader held talks with Karen Lee, the Labour MP who is the coordinator of the All Party Parliamentary Group on Cuba in the House of Commons. He also met Baroness Angela Smith, the Labour peer who heads the Multiparty Group for Cuba, and members of the House of Lords that have supported the island through years of blockade and unfair treatment.
Posted by london communists at 8:01 pm No comments:

Saying No to Racism!


By New Worker correspondent
London comrades joined the thousands of people who marched through central London, from Portland Place to Whitehall, to protest against the rising tide of racism and fascism, as symbolised by organisations such as the Football Lads Alliance and the English Defence League.
The demonstration was called by Stand Up to Racism, Unite Against Fascism and Love Music Hate Racism, with the support of a number of unions and community groups as well as senior members of Labour’s Corbyn leadership.
Members of the London Metropolitan cell of the New Communist Party joined the march and sold some New Workers at the demonstration that attracted anti-fascists and activists from all over London and beyond. Seen on the march were hammer and sickle red banners including one with Marx, Lenin and Stalin, as well as Brazilian and South African flags. Unfortunately there was also a European Union  flag, which reflected the mistaken view of the soft-left and liberals that the EU is some sort of bastion of progress and anti-fascism.
The march ended with a rally in Whitehall that was addressed by Len McCluskey from Unite, FBU's Matt Wrack, Kevin Courtney of the National Education Union, Zita Holbourne from the PCS civil service union, Mick Cash of the RMT, Lowkey the rapper, Bilou from the Grenfell Tower campaign and 1970s rock star Tom Robinson – who was introduced as the real ‘Tommy Robinson’ as opposed to Stephen Yaxley-Lennon, who uses that name in honour of a well-known Luton Town football hooligan and to avoid using his obviously middle-class name in front of his racist followers.
Lowkey made an excellent speech saying that racism and fascism benefit the one per cent. Bilou spoke with anger about the recent disgusting incident in south London in which a model of the Grenfell Tower was burnt on a bonfire.
A small counter-demonstration of probably no than 15 fascists (your correspondent saw about six or so) was escorted by police up the other side of Whitehall. Afterwards the degenerates ensconced themselves in a pub to no doubt emulate Hitler’s Beer Cellar putsch. The pub was protected by a cordon of police in riot gear plus two lines of mounted police, which just goes to show that the police protect fascists and are definitely not neutral!
Posted by london communists at 7:57 pm No comments: