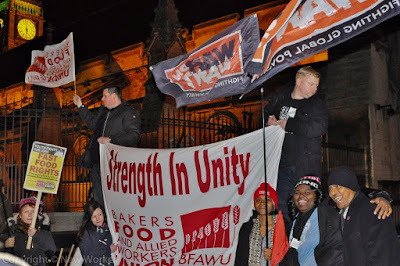 DOZENS of fast food workers from both sides of the Atlantic last Wednesday 13th January, laid siege to the MacDonald’s restaurant at the top end of Whitehall with banners and placards. Then they charged down Whitehall in a noisy protest to the House of Commons for a meeting in a committee room inside on low pay and zero hours.
The protest and meeting were organised by Fast Food Rights, a group that bridges the Atlantic and in this country is supported by the Bakers, Food and Allied Workers Union (BFAWU) and the GMB general union.
In the United States tens of thousands of fast food workers have led strikes involving low paid workers demanding $15 an hour and a union.
The forum meeting in the Houses of Parliament saw US fast food workers sharing a platform with British fast food workers, swapping experiences on a panel discussion.
They were joined on the panel by Shadow Chancellor John McDonnell, who founded the Fast Food Rights campaign alongside the BFAWU union in 2014.
Other speakers included Tom Woodruff, who founded the Service Employees’ International Union (SEIU), Labour MP for Brent Central Dawn Butler, Kevin Rowan from the TUC and Owen Espley from War on Want.
The campaigners are demanding $15 an hour in the US and £10 and hour in Britain for all fast food workers and trying to get as many as possible involved in unions.
The US delegation had been involved the day before, 12th January, in organising a press event in Brussels. Unions and allies gathered in Brussels to press their case at the EU that McDonald’s must reform its practices towards workers, consumers, and society as whole. BFAWU delegates took part in the Brussels event.
Before the meeting Kamaljeet Jandu, GMB National Officer, said: “Fast food workers are organising and fighting back. In the UK and America fast food workers are forced to live in poverty by multi-national and hugely profitable companies like McDonald's.
“While McDonald's has raked in profit at the expense of their workers, they have been exposed as not paying their tax.
“McDonald's is in the dock. GMB is inviting the public to join fast food workers in the fight for higher wages, union rights and respect at work.”
Ian Hodson, National President of BFAWU, said: “Over the years, we have seen business after business seizing the opportunity to cut pay and force workers to rely on state handouts.
“Businesses and companies have the ability to enrich people's lives and make a valuable contribution to society, yet so many of them have decided to tread the path of exploitation and misery, forcing those who work for them into a cycle of debt that they will never be able to get out of.
“We are slowly beginning to realise that the real problems in the country are not those on benefits, but corporations who don’t pay their taxes; squirrelling away their profits in tax havens and paying as little as they can get away with.
“If that wasn’t bad enough, the Government has targeted those at the lowest end of the pay scale and systematically demonised those in need of support; the sick the disabled and the unemployed, whilst protecting the companies that choose to operate in a grossly immoral fashion.
“We believe that the way to improve society is to make work pay and the minimum wage should be at least £10 an hour. We don't believe it's pie in the sky, it’s a living wage.”
Posted by london communists at 5:29 pm No comments:

Down with the Kiev puppet regime! 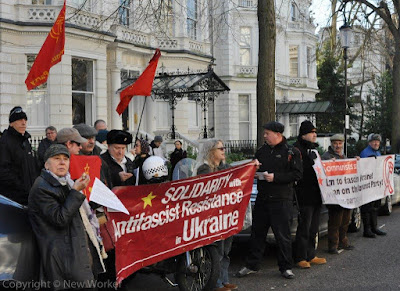 Comrades and friends braved the freezing cold to picket the Ukrainian embassy in London on Tuesday 19th January in protest at outlawing of the communist party by the Kiev regime. Communists and anti-fascists rallied to the call from the Communist Party of Britain (CPB) for a demonstration in support of the Ukrainian communist party, which was banned by the puppet regime last month.
The banning of the Communist Party of Ukraine, which held 32 seats in the Kiev parliament, is the latest in a wave of repression against all left-wing forces that began soon after the fascist-led coup in February 2014. It is now a crime to promote communism or Marxism, or to display any symbols associated with the communist movement. The “decommunisation” legislation passed last year also requires all Ukrainians to show “respect” to the “Organisation of Ukrainian Nationalists” (OUN) and other fascists who collaborated with the Nazis during the German occupation during the Second World War.
NCP leader Andy Brooks joined CPB general secretary Rob Griffiths at the demonstration to hand in a letter of protest to the embassy endorsed by both parties and the World Peace Council, the British Peace Assembly and the Indian Workers’ Association in Britain. But the ambassador, Natalia Galibarenko, refused to meet the protesters or even allow them in to deliver the letter.
Nevertheless the letter will be sent to the puppet regime envoy and the protests will continue. “This is only the latest in what will be an escalating campaign,” Rob Griffiths told the crowd. “It’s not just the party that’s been banned but left-wing symbols and even the works of Karl Marx. The first sign of a fascist regime is that it bans communists and trade unionists.”
Posted by london communists at 4:52 pm No comments:

RAIL union activists were out in force at major stations throughout the country early on Monday morning protesting as the latest rise in rail fares came into effect.
Labour leader Jeremy Corbyn joined the Aslef protesters at Kings Cross in London while senior RMT officers Alex Gordon and Eddie Dempsey were out at Paddington.
A recent survey has shown that rail travellers in Britain pay around six times as much for travel as their counterparts in most of Europe.
Passengers in Britain are currently spending 13 per cent of their wages on travel while Italian commuters pay two per cent, Spanish pay three per cent, and Germans pay four per cent. At the same time, a significant part of the British rail system is owned by the publicly owned railways of Germany, France, Belgium, the Netherlands, and China.
Commuters are now paying 25 per cent more on average for their season tickets since David Cameron became Prime Minister in 2010. Workers’ transport costs have risen three times faster than wages have in the last five years.
Corbyn condemned the outrageous fare rises and the profits being extorted by foreign-owned rail companies. He said: “It seems the Tories have no objections to public ownership so long as the British public don’t get the benefit.
“It is a national disgrace that higher fares are squeezed out of Britain’s passengers every year so that dividends can be repatriated to Berlin, Paris or Amsterdam to subsidise other countries’ railways, or paid to private shareholders in Britain.”
And he reiterated his promised that renationalising Britain’s railways would be one of the first acts of a Labour government in 2020.
Corbyn added: “Labour has nothing against the public ownership of railways in other countries, far from it. But we want our own railways to be owned by the British people.
“Railways are part of the new green economy of the future. That’s why Labour is now pledged to bring our railways into democratic public ownership at home.
“A modern, publicly owned People’s Railway is central to our plans to rebalance economic growth, not just North-South but right across the country.
“So one of the first acts of the next Labour Government in 2020 will be to bring franchises into public ownership as soon as possible and start to create a properly integrated railway system with affordable fares â€“ in the interests both passengers and taxpayers.”
Also present at Kings Cross were Mick Whelan, ASLEF’s general secretary and Shadow Transport Secretary Lilian Greenwood as well as Mick Cash of the RMT and Manuel Cortes of the TSSA.
According to a recent YouGov poll 62 per cent of people in Britain agree that public ownership of the railways should be reconsidered.
Their main question is: if British railways are so profitable for foreign states and private corporations, why should Britain not reap the benefits for itself? Or put another way, why shouldn’t profits be invested in improving infrastructure and reducing travel costs for British travellers rather than going into someone else’s pockets?
Shadow Chancellor John McDonnell also insists that the Labour Party is now “fully behind bringing the railways back into public ownership”.
This policy was outlined at the 2015 Labour conference, when the party promised to “return private rail franchises into public ownership when they come to an end”.
This would mean around a third could be brought back into public ownership by 2025 if Corbyn wins the 2020 general election. The five franchises due to expire between 2020 and 2025 are Thameslink, Southern, and Great Northern, Chiltern Railways, East Coast, Transpennine Express, and Northern.
Posted by london communists at 3:43 pm No comments: