Blair sneaks into Chilcot before dawn 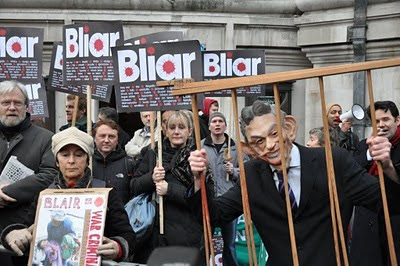 FORMER Prime Minister Tony Blair arrived for his second session with the Chilcot inquiry into the Iraq War at around 7.30am in the dark to avoid being confronted by demonstrators who want to see him tried as a war criminal for his role in launching the illegal invasion of Iraq.
Nevertheless some protesters were there to see him and scores more soon joined them, holding banners calling the ex-premier a liar and chanting “Tony Blair – to The Hague”, where war crimes tribunals are held.
One man wore a Tony Blair mask and handcuffed himself to a mock prison cell door to loud cheers from his colleagues.
Andrew Murray, chair of the Stop The War Coalition, said: "Yet again he has sneaked in under cover of darkness, mirroring the way in which he launched his illegal war in 2003.
"Hopefully later today he will be asked to tell the truth about the legal advice he was given by Lord Goldsmith and also be challenged publicly about the contents of his letters to George Bush which he is still keeping secret."
Peter Brierley, whose son, Lance Corporal Shaun Brierley, died soon after being deployed to Iraq, said he was not surprised that Blair arrived early and avoided being confronted by the protest, as he did last time he was questioned by the inquiry.
"He cannot be questioned properly here because he can just walk out any time he chooses. He should face a proper court and be questioned by barristers and lawyers. He should face a criminal investigation because he is a war criminal.
“He killed my son and I will continue campaigning until he is brought to justice."
Labour MP Jeremy Corbyn (Islington North) said it was a “disgrace” that letters exchanged between Blair and former US president George Bush were not being made public.
"If this inquiry means anything then all the relevant papers must be released."
Bruce Kent of CND told the protesters: “Tony Blair must know that the game is up because fellow members of the establishment are now beginning to turn against him.
“What he did was a disaster and he effectively put two fingers up to the very fragile structure put in place to try to save generations from the scourge of war. How many other thugs and bandits around the world are now saying, well if he can get away with it, so will we?"
John Rees, one of the founders of the Stop The War Coalition, said the inquiry was a waste of money which would not get to the truth of the Iraq war.
The coalition said there were growing calls for Blair to face a war crimes tribunal, where all the correspondence between Blair and Bush could be revealed.
Meanwhile a Tory MP has admitted that Britain and the United States have lost the legitimacy and trust necessary to find a resolution to the war in Afghanistan
Rory Stewart, MP for Penrith and the Border, said we're making up reasons for being in Afghanistan: “After nine years, the international community needs to recognise it lacks knowledge, it lacks power, it lacks legitimacy." 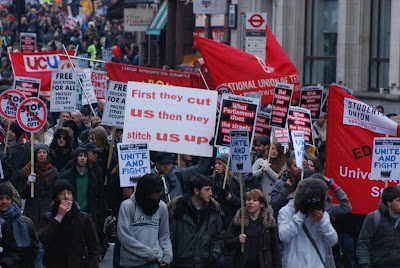 Students and trade unionists took to the streets of central London and Manchester last Saturday in a continuation of the protests at rising tuition fees, the abolition of Education Maintenance Allowance and cuts in general that hit the headlines in the last weeks of 2010.
These were the first major demonstrations since late last year, when students occupied Parliament Square in London and attacked a car carrying Prince Charles and his wife the Duchess of Cornwall.
The coalition government plans to cut £2.9 billion of state support a year for universities in order to tackle a budget deficit now at about 11 per cent of national output following the global financial crisis.
In London students gathered in Malet Street in the heart of London University and set a cracking pace – to avoid being “kettled” – to the designated end of the march outside Milbank.
This building, which houses the headquarters of the Tory party, had been ransacked in a previous demonstration. But this time the students swept straight past it and headed on to the Egyptian Embassy, where they joined Egyptian ex-patriates in a solidarity protest with the anti-government demonstrations in Cairo.
Posted by london communists at 7:17 pm No comments: 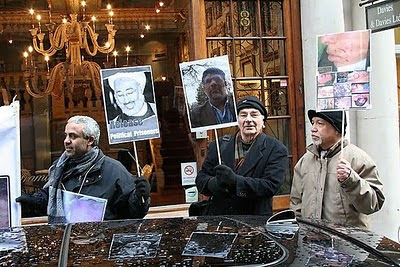 
Human rights campaigners and Bahraini exiles held a picket in London last week to call for democratic rights in the oil-rich Arab kingdom that is Anglo-American imperialism’s close ally in the Gulf. The demonstrators brought their message home to the Bahraini ambassador, who was the guest speaker at a lunch hosted by the Middle East Association, a British business lobby based in central London, by picketing the venue and demanding the release of all political prisoners and an end to the use of torture by the police.
During the first session of the trial of 25 Bahraini dissidents last October, all the defendants, except one, complained of various kinds of physical torture. The accused are charged with sedition, anti-regime activities and smearing its reputation abroad. They say they had been held in underground dungeons of the National Security Apparatus (NSA) – the Bahraini government’s agency that controls the Special Security Forces and whose major role, since its establishment in 2002, has been to target human rights activists, political opponents of the monarchy and to infiltrate their organisations.
The Bahrain Centre for Human Rights (BCHR) claims that the NSA was directly responsible for the death of an activist, Ali Jassim Mohammed, in December 2007, as well as suppressing seminars, demonstrations and other protest activities.
The BCHR says the NSA is responsible for the arrest and torture of hundreds of human rights defenders and activists; the fabrication or exaggeration of terror events or plans to justify intensive security measures, running media campaigns to smear the reputation of activists and to justify arrests, unfair trials and extreme sentences against activists considered opponents of the royal family.
Posted by london communists at 4:09 pm No comments: 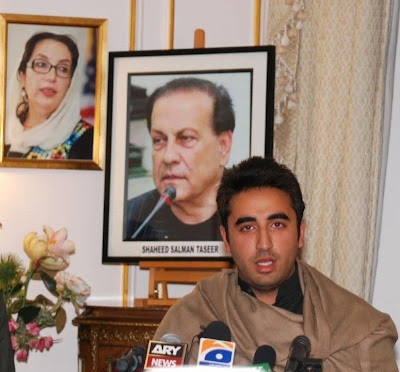 NCP leader Andy Brooks and other London comrades joined mourners in London on Monday for a last salute to Salman Taseer, the Punjabi governor killed last week by a religious fanatic. Well over a hundred members of the British Pakistani community gathered at the Pakistani High Commission to hear tributes from British and Pakistani politicians including former Labour minister Gerald Kaufman and Bilawal Bhutto Zardari, the son of the President of Pakistan.
The governor of Punjab province was a leading member of the social-democratic Pakistan People's Party (PPP), which leads the coalition government and is headed by Bhutto Zardari and his father. Taseer was gunned down by a bodyguard who claimed he was acting to defend Islam.
Reactionary religious leaders had denounced Governor Taseer after he publicly opposed blasphemy laws that the fanatics have used to sentence a Christian woman to death. Hundreds of Muslim clerics are now defending his assassination. But Bilawal Bhutto Zardari said those who supported the killing were “the real blasphemers”.
"Because of you, the message of Islam is distorted in the eyes of the world," said Bhutto Zardari, whose grandfather, the fourth president of Pakistan, was judicially murdered by a military regime and whose mother was killed by religious fanatics three years ago while campaigning for the presidency.
"Those who attack my religion, especially those who corrupt its peaceful message, you are what I call covert blasphemers and you will be defeated," Bhutto Zardari declared. "This will be our jihad”.
Bhutto Zardari further pledged to defend Christians and other minorities from the “dark forces of violent extremism, intolerance and bigotry”.
"We will defend you. For those who wish to harm you for a crime you did not commit, they will have to go through me first," he said.
The killer and those behind him believe erroneously that they will go to Heaven, Bhutto Zardari said. “But Allah has promised them Hell, and we will send them there,” he vowed.
Posted by london communists at 8:05 am No comments: