THE GREAT October Russian Revolution is celebrated by millions of communists all over the world and last weekend comrades and friends joined them at the NCP’s annual tribute to the greatest event of the 20th century.
The print shop was, as usual, was transformed into a bar and buffet for comrades to meet friends old and new and greet the honoured guests who joined us on Saturday to honour the generations who fought and built the Soviet Union.
Six communists took the floor during the formal part of the proceedings, opened by Party Chair Alex Kempshall, including Dermot Hudson from the UK Korea Friendship Association, Kumar from Second Wave Publications, Michael Chant from the Revolutionary Communist Party of Britain (ML) and NCP leader Andy Brooks as well as Prof Vijay Singh, the editor of the Indian Marxist journal Revolutionary Democracy and Thae Yongho from the embassy of the Democratic People’s Republic of Korea.
Every comrade spoke of the lessons of the Bolshevik revolution led by Lenin and Stalin and the need to build the revolutionary movement in Britain to build the resistance to austerity and the creeping fascism of the ruling class.
They all spoke of the inspiration that the Great October Revolution had given to people in struggle all around the world – that oppressed workers had not only been able to overthrow a mighty imperialist empire but were then able to establish a dictatorship of the proletariat and start building socialism. In doing so they turned an economically backward country, barely emerging from feudalism in some parts, into a world power.
This was taken up by Daphne Liddle in her spirited appeal for the New Worker fighting fund to keep our communist press going which raised £410 for our communist weekly!
Posted by london communists at 12:19 am No comments: 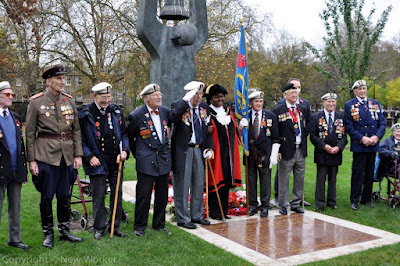 New Communist Party (NCP) leader Andy Brooks joined veterans, diplomats and local dignitaries at the Soviet Wr Memorial in Geraldine Mary Harmsworth Park in Southwark on Sunday 8th November to honour the Soviet soldiers, sailors, air force and civilians who fell fighting the Nazis in the Second World War.
There were brief speeches from Philip Wilkinson of the Soviet Memorial Trust Fund, the Mayor of Southwark, local Labour MP Neil Coyle and Alexander Kramarenko from the Russian embassy.
Wreaths were laid by diplomats from the Russian and Belarus embassies, as well as veterans’ organisations, the NCP and representatives from the Russian community in London. As usual the veterans of the Arctic Convoy Club were there in force.
The ceremony ended with the exhortation spoken by Russian Convoy Club veteran Stanley Ballard, followed by two minutes silence and the reveille.
Posted by london communists at 12:12 am No comments:

AROUND 120 trade union activists gathered for a protest rally outside the House of Commons while the Tory anti-trade union Bill passed through its third reading.
Speakers at the rally included John McInally from the civil service union PCS, Ian Lawrence, general secretary of the National Association of Probation Officers, Ronnie Draper of the bakers’ union BFAWU, Stene Gillan, general secretary of the Prison Officers Association, Dr Yannis Gourtsoyannis of the British Medical Association, John McDonnell Shadow Chancellor and Green Party MP Caroline Lucas.
They all called for stronger trade union unity against the Tory onslaught on union rights and there was a lot of passionate criticism of the TUC for its failure to give a strong lead in this battle.