Solidarity and cultural events big and small are taking place up and down the country to mark the 50th anniversary of the Cuban revolution. Many are part of the festival organised by Cuba50, the umbrella committee supported by the Cuban Ministry of Culture, Cuban Embassy, Cuba Solidarity Campaign and a number of unions, tourist and business interests. Others like last week’s solidarity meeting in the House of Commons are being organised by progressive organisations like Third World Solidarity (TWS).
Third World Solidarity is no stranger to the Pakistani community in Britain or New Worker supporters in London. The driving force is its Chair, Mushtaq Lasharie, a Labour councillor in Kensington, and TWS has sponsored impressive solidarity events throughout the year since its foundation in 1986.
Last Tuesday was no exception with glittering panel of guest speakers that included the ambassadors of Cuba and Venezuela, veteran Labour politician Tony Benn, the famed American novelist and commentator Gore Vidal and, of course, Mushtaq Lasharie himself.
Ably chaired by Labour MP Dave Anderson speaker after speaker spoke of their impressions of the Cuban revolution and its lesson for today. Tony Benn said the Cuban revolution was one of the most important events of the 20th century because it was a direct attack on the US “Monroe Doctrine” which regarded the whole of Latin America as their own backyard. It gave the people of Cuba the opportunity to develop the full creative spirit of the Cuban people. Inspire by Fidel, they were led by Fidel, Benn said but the achievement was that of the Cuban people themselves.
Speaker after speaker paid their own tributes to Cuba’s new life on the day Barack Obama had been sworn in as President of the United States in Washington DC and this was the cue for Gore Vidal, who gave a scathing commentary on American political life over the period that largely spanned his own 80-odd years. Fidel had seen out all his enemies: the Kennedy brothers, Lyndon Johnson and the two Bush’s .But Vidal was mildly optimistic about Barack Obama saying he hoped the new president would restore the American constitution and American civil rights.
Gore Vidal visited Cuba in 2007 and he said “I came to Cuba with my broken knee to help break 40 years of embargo” – a call echoed by the 150 or so who packed the parliamentary committee room in Westminster.
The American man of letters who is wheel-chair bound called his assistant, a former US naval officer, to speak about “Veterans against the War” and the anti-war movement that is growing in the United States. Though “Veterans against the War” has only 2,000 members’ opposition to the wars in Iraq and Afghanistan amongst the officers and the rank-and-file was put at around 50 per cent and growing.
And that was the point Mushtaq Lasharie stressed in his call for solidarity with all the struggling peoples of the world, whether they be in Cuba, Iraq, Afghanistan or the streets of Gaza.

Third World Solidarity can be contacted by writing to : The Secretary, TWS, 303 Testerton Walk London W11 1WG
Posted by london communists at 12:59 pm No comments: 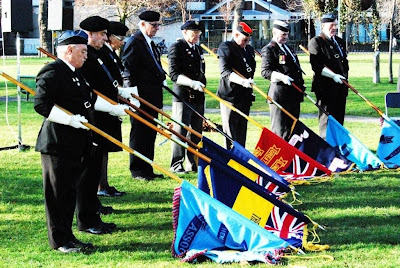 AMBASSADORS, religious leaders, war veterans, local dignitaries, an MP, a union leader, communists and other progressives gathered last Tuesday at the Soviet War Memorial in Geraldine Mary Harmsworth Park, next to the Imperial War Museum, to mark the international day of remembrance for the victims of the Nazi Holocaust.
The event began with a short religious service led by Rabbi the Reverend Alan Greenblatt who stressed the theme of this year’s Holocaust Memorial Day: “Stand up to hatred”.
And he recited the Jewish prayer of remembrance for the dead.
This was followed by a wreath-laying ceremony at the Soviet War Memorial. Those who laid flowers included: Southwark Mayor Councillor Eliza Mann, Russian Ambassador Yury Fedotov, Southwark MP Simon Hughes and Philip Matthews of the Soviet Memorial Trust Fund.
Ambassadors and attachés from Azerbaijan, Belarus, Kyrgyzstan, Ukraine and Uzbekistan also laid flowers. As usual the North Russia Arctic Convoys Club laid flowers, as did the local British Legion, the RAF-Russia Association and many others.
The New Communist Party flowers were laid by Robert Laurie; Phil Brand laid flowers for the Communist Party of Britain.

Posted by london communists at 1:22 pm No comments:

THE CIVIL Service union PCS last week expressed anger at Government decision to go ahead with a third runway at Heathrow.
Other unions, Unite and GMB, welcomed the decision because it would provide construction jobs to build the airport extension and then more permanent jobs to staff it.
But PCS believes that a third runway would have a devastating environmental impact with the airport becoming the biggest source of carbon emissions in the country, as well as breaching European Union safety levels for nitrogen dioxide.
PCS believes there are viable alternatives to expanding Heathrow which have not been considered by the Government and pointed to research by authoritative sources, including the Sustainable Development Commission, which casts doubt upon the economic benefits of Heathrow expansion given the current downturn.
The union says research conducted recently by the Campaign for Better Transport shows that businesses in Britain do not need bigger airports.
A combination of high speed rail, better facilities at stations for business travellers and improved teleconferencing would serve the needs of business just as well.
Commenting on the announcement, PCS assistant general secretary Chris Baugh said: “A third runway at Heathrow must be opposed. It will create more noise and pollution and will mean the government won’t be able to meet the targets in the historic Climate Change Act passed in Parliament only last year.
“Over 1,000 people who live in the area will also be removed from their homes. The Government should instead produce a new transport strategy for the UK focussed upon a publicly owned high speed rail network that will create jobs and contribute to the transition to a low carbon economy and the fight against climate change.”
Posted by london communists at 9:55 pm No comments: 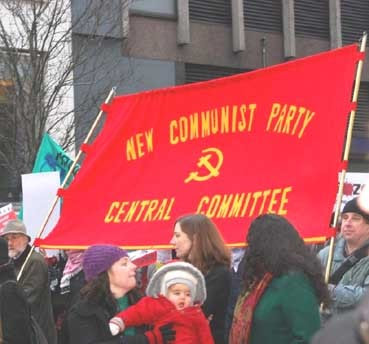 AROUND 100,000 protesters braved sub-zero temperatures and blistering winds last Saturday to take part in the biggest public demonstration for several years to express anger and anguish at the continuing slaughter of the people of Gaza by the invading Israeli war machine.
It was the second Saturday in a row that saw a massive demonstration on this issue in London, while other demonstrations continued in major cities throughout the world, along with local vigils and other protests.
The New Communist Central Committee banner was present among thousands of others from Palestine Solidarity, Stop the War, CND, dozens of Muslim organisations. There were also trade union and many trades council banners.
The protest began with a rally in Hyde Park, addressed by a long list of speakers, including Andrew Murray, who chairs Stop the War, Azzam Tamimi, director of Islamic Political Thought, George Galloway MP, Martin Linton MP, who founded Labour Friends of Palestine, jazz singer Annie Lennox, actor Lauren Booth, Children’s Poet laureate Michael Rosen, activist Bianca Jagger and the Reverend Garth Hewitt, canon at St George’s Cathedral in Jerusalem.
As the march flooded into Kensington High Street in order to lobby the Israeli Embassy police divided the march into sections and penned them separately into various pens, surrounded by steel barriers and ranks of riot police.
The marchers were then held in this way for almost two hours, unable to come or go and very cold, tired and in some discomfort, while riot police tried to provoke them into rioting. This was a tough time for elderly or very young demonstrators but for all their efforts to antagonise Asian youths in these penned enclosures, there was very little violent response – a few of the light wooden sticks used to hold up placards were thrown and some protesters brought old shoes they had brought for the purpose at the Israeli embassy.
At one stage police charged demonstrators, knocking some to the ground and injuring veteran campaigner Ray Davies from South Wales.
In the following mêlée the windows of a branch of Starbuck’s were broken.
Many noted that this seemed to be a return to the confrontational policing tactics of the 1980s which disappeared from London during the mayorship of Ken Livingstone.
Tory Mayor Boris Johnson last summer made a point of forcing the resignation of Metropolitan Police Chief Sir Ian Blair, who had worked closely with Livingstone. hackers
Immediately before the demonstration the website of Stop the War Coalition was forced to shut down after it was attacked by hackers.
A spokesperson said: “It’s a well-known tactic. The same thing happened to us before our anti-Iraq war protests in 2003. “We obviously can’t prove any connection but the timing would suggest that it’s a supporter of Israel. In fact, someone told me there is a firm in Israel which specialises in that sort of thing.
“At the same time that our website was under attack, a number of videos went up on YouTube which claimed the demonstration had been cancelled. Someone posted notices on our Facebook groups saying the same thing.”
Meanwhile the TUC has launched an emergency financial appeal through its TUC Aid organisation to assist the humanitarian effort in Gaza.
In the occupied north of Ireland there was a mass march against the massacres in Gaza organised by the Irish Congress of Trades Unions (ICTU) despite objections from the Democratic Unionist Party, which supports Israel.
A parade planned by the Ireland Palestine Solidarity Campaign and Trade Union Friends of Ireland has been cancelled.

Posted by london communists at 1:25 pm No comments: 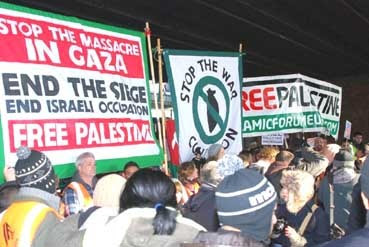