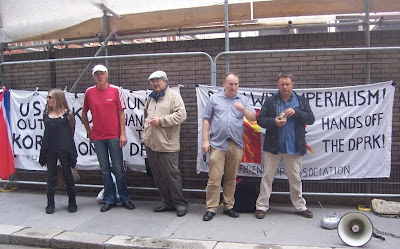 Friends of the Korean revolution were out again in London last Tuesday outside the south Korean and American embassies to condemn the latest imperialist war-games on the Korean peninsula.
NCP leader Andy Brooks joined protesters, including some who had come from Oxford and Southampton, in denouncing the US “Ulji Freedom Guardian” exercises of the American army of occupation in south Korea and their puppet auxiliaries. The protest was the latest in a series of afternoon solidarity pickets organised by the UK Korean Friendship Association and supported by the NCP, the For Bolshevism group and a number of other solidarity movements.
After a two hour stint outside the south Korean embassy the protesters moved on to Grosvenor Square to picket the US embassy chanting slogans in support of peace and Korean re-unification and reading out statements from the Democratic Korean media.
Dermot Hudson of the KFA said that the Obama regime had continued with the policy of Bush aimed at stifling the DPR Korea. “Ulji Freedom Guardian” is a rehearsal to invade the DPRK and that Obama is just the trendy face of US
Imperialism, he said. Other speakers also drew attention to the insidious attempt of the US imperialists to extradite Sean Garland, the leader of the Workers Party of Ireland and friend of the DPRK, and alleged computer hacker Gary McKinnon.
Passers-by stopped to chat with the demonstrators and some joined in the protest including a worker from one of the former Soviet Baltic republics and members of London’s Malaysian community.
Afterwards some picketers adjourned for a small social to mark the 50th anniversary of the Songun revolutionary leadership of Korean leader Kim Jong Il and plan for future events and meetings.
Posted by london communists at 3:46 pm No comments: 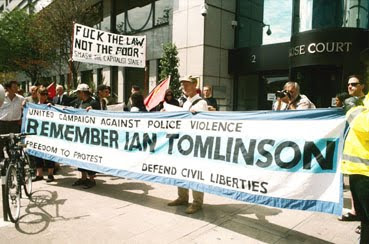 AROUND 200 protesters gathered at the London headquarters of the Crown Prosecution Service on the south bank of the Thames in Southwark last Friday to demand that the police constable responsible for pushing Ian Tomlinson to the ground with such force that he died minutes later should face a criminal prosecution.
The protesters were demanding further action be taken against Pc Stephen Harwood – and the CPS for shielding police officers who assault, injure and kill members of the public from facing criminal charges.
Members of the campaign for justice for the victims of police violence were there in force.
The event was noisy but there were no incidents. After a number of speeches there was a two-minute silence for Ian Tomlinson.
Tomlinson was making his way home from work, walking with his hands in his pockets through an area where riot police were clashing with G20 protesters on 1st April 2009.
Dozens of witnesses saw, and some filmed on their mobile phone cameras, as PC Stephen Harwood gratuitously pushed Tomlinson from behind; since his hand were in his pockets Tomlinson fell heavily and died shortly afterwards.
A week ago the CPS refused to prosecute because, they said, three post mortem examinations had given two different results. This decision was given on 22nd July – exactly five years from the shooting by armed officers of Jean-Charles de Menezes.
Understandably the family of Ian Tomlinson was greatly concerned by the lengthy investigation fearing a cover-up and the impact this whole process has had on their lives.
In April 2010, John McDonnell MP and leading civil liberties campaigners, MEPs and trade unionists wrote a letter to the Guardian to express their “growing concerns” about the investigation.
The Labour Representation Committee expressed outrage at the decision not to prosecute Harwood, Saying: “Today’s announcement illustrates that the police are a law unto themselves. Ian Tomlinson died in an unprovoked savage attack exposed on video yet that is not enough for the CPS to seek prosecution. Where is the justice for Ian Tomlinson’s family – who have described the decision as a “disgrace”?
John McDonnell MP, who chairs the LRC, said: “Given the stark nature of the video evidence it is hard to understand the CPS’s findings. An independent public inquiry is warranted.”

Posted by london communists at 12:12 pm No comments: 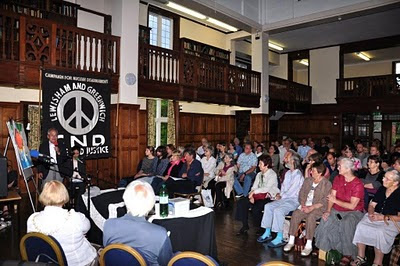 
AROUND 100 people attended an event last Tuesday in the historic early 17th century Charlton House, south London, to commemorate the dead and injured victims of the atom bomb that was dropped on Hiroshima in 1945 and to hear survivor Shoso Kawamoto tell his story.
The event was organised by Lewisham and Greenwich CND with Sydenham and Forest Hill CND and Beckenham and Bromley CND, to commemorate the 65th anniversary of the bombing of Hiroshima and Nagasaki.
The event began with a bring-and-share picnic on the lawn behind Charlton House, after which the Mayor of Greenwich, Councillor Barbara Barwick, welcomed Shoso Kawamoto from the Hiroshima Peace Museum who spoke about his life in Hiroshima as a child in the aftermath of the bombing.
This was followed by a moment of silence in the Charlton House Peace Garden and then music will be provided by the One World Club.
Posted by london communists at 1:19 pm No comments:

Email ThisBlogThis!Share to TwitterShare to FacebookShare to Pinterest
Labels: peace

The spirit of Beijing comes to London


JUST over a year ago the people of Charlton in south east London noticed council workers installing a variety of exercise machines in a corner of Charlton Park, close to the path where hundreds of people every day cut through from various estates to the village shops and bus stops, on their way to work, shopping or whatever.
The council workers also erected a couple of basket ball nets and a five-a-side football sized goal with a small kick-about area and a long wall with irregular hand and footholds for would-be climbers to make their way along.
The equipment was checked and then just left. For anyone and everyone to use, as and when they wanted to. No formalities, no joining a club, no commitments to turn up regularly. Just use as you want to, as the mood takes you.
And it has been a roaring success. It is almost continually in use at all times of day and late into the night. It has its busy times, mostly in the evenings but it is rare to pass it at any time of day and not find at least one or two people using it.
It is used by schoolchildren coming home from school, by young men and women, by early morning joggers, by the middle aged and occasionally the elderly. It is used by all shades and colours of Londoners as well as new arrivals from the Third World and eastern Europe. Women’s fitness clubs turn up to use it regularly, as do budding sports enthusiasts. Small children who cannot reach to use the equipment as intended find ingenious different ways to use it. People who have heard about it come from miles around to use it.
So far there are no reports of anyone being hurt using it, nor any serious arguments developing over it. And it has never been vandalised in any way.
Earlier this year two solid table-tennis tables were added. We thought that the wind would make outdoor ping-pong impossible. We were proved wrong. At first the tables were used mainly by young immigrants from the Far East but their enthusiasm has spread and now locals are taking up ping-pong.
The young men who used to meet regularly at a certain park bench at dusk to talk and trade in small paper packages have moved on – or given up and joined the free gym users. The spot is now much too public for that sort of trade. And the free gym undermines that trade in another way – it needs customers who are truly bored with their lives and there are now fewer of those.
The free gym was put up after a couple of Greenwich councillors who, in the run-up to the 2012 Olympics, went out to Beijing just before the 2008 Olympics to study the way the Chinese authorities prepared there. Apparently they noticed these small free gyms erected in parks throughout the Chinese capital and thought they were a good idea.
Free access to sport for all was a way to get local people interested in the games. But did those councillors realise they were importing dangerous communist ideas?
They decided to try a couple in the London Borough of Greenwich to see how they worked out; they would then roll out the scheme to every park in the borough – and other boroughs might take it up.
Greenwich also pioneered the free swimming for over-60s scheme that the new Con-Dem government has just axed – even though it can hardly have cost the borough anything – a few extra people in the pool at off-peak times cannot have added to the running costs.
Likewise the free gym, once erected it cannot cost the borough much to maintain it.
But there are some in the new government who abhor in principle the idea that anything should ever be free. It is part of their ideology; they will claim it is unfair on the commercial gyms in the area that charge people a fortune so only the well off can afford to use them.
Will the borough continue with the free gym and expand it as planned? Or will the Government squash the whole idea as far too communist? We shall wait and see.
Posted by london communists at 1:11 pm No comments:

When imperialism was stopped in its tracks! 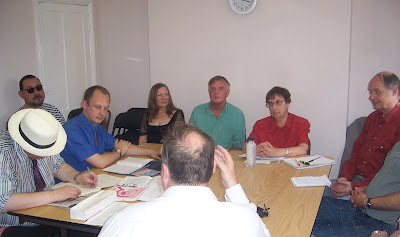 By a New Worker correspondent
New Worker supporters joined other Korean solidarity campaigners at London’s Conway Hall for a celebration of the 57th anniversary of the Korean people’s victory in the Fatherland Liberation War on Saturday 24th July.
Called by the Juche Idea Study Group of England (JISGE) and the Association for the Study of Songun Politics the meeting opened with a talk by JISGE Chair Dermot Hudson followed by other contributions from Shaun Pickford and Kevin Cain calling for solidarity with the DPR Korea. Following a round-table discussion a message and a solidarity resolution were adopted by all present. Some participants in the meeting then went to south east London to a party to celebrate the Korean people’s defeat of US imperialism and its lackeys in 1953.
Posted by london communists at 4:38 pm No comments: