THE LONDON Fire and Emergency Planning Authority (LFEPA) last Monday voted to reject plans to close 12 fire stations, cut 18 fire engines and 520 jobs after a fierce debate.
The plan was put forward by London Fire Commissioner Ron Dobson and the London Mayor, Boris Johnson, in a bid to cut the London fire service budget by £45 million.
But it was opposed by Labour on safety grounds. The authority voted by nine to eight in favour of a Labour amendment, deleting any references to station closures, appliance reductions and job losses in any future public consultation, that was backed by the Greens and Liberal Democrats.
Outside the meeting in Union Street south London, around 1,000 firefighters, along with other trade unionists and supporters assembled to protest noisily at the proposed cuts.
The lobby was called by the London region of the Fire Brigades Union and supported by other unions, including the RMT taxi drivers’ section and the National Union of Teachers.
FBU London regional secretary, Paul Embery, called on people to attend the rally: “The proposed cuts are reckless and wrong. You can’t slash 12 fire stations, 18 fire engines and 520 firefighter posts without jeopardising public safety.
“The helicopter crash that occurred last week showed the importance of having a properly-funded, well-resourced fire service in the capital, and it is worthy of note that the first crew at the scene was mobilised from a station – Clapham – earmarked for closure and arrived within four minutes.
“The safety of Londoners is playing second fiddle to crude economic considerations. We are calling on the commissioner of the London Fire Brigade, Ron Dobson, and Boris Johnson to think again. If they don’t, we will campaign as vigorously as we can, alongside the public, to defend London’s fire service.”
Matt Wrack, the general secretary of the FBU, spoke of the need to oppose the Government’s austerity programme on all fronts and to contemplate national strikes. And he challenged the Fire Commissioner’s hypocrisy  in claiming that the fire service is meetings its targets in arrival times.
“That’s because they keep changing the target times. Of course they meet the targets because they set them. It used to be three minutes in London, then five minutes and now eight minutes.
“And we all know that those extra minutes make the difference in saving lives or having to drag bodies out of buildings.”
He linked the FBU fight to other battles to save vital services, such as defending NHS hospitals from cuts.
The list of stations that had been earmarked for closure include Belsize, Bow, Clapham, Clerkenwell, Downham, Kingsland, Knightsbridge, New Cross, Silvertown, Southwark, Westminster and Woolwich.
LFEPA has voted against the cuts but London Mayor Boris Johnson, who has ultimate power over the fire authority, said he will "ensure" the consultation continues.
"This consultation will continue as planned. I will be issuing a mayoral directive to ensure it does."
Posted by london communists at 1:20 pm No comments:

AROUND 1,000 antifascists gathered outside the Greek embassy in London’s Holland Park last Saturday in freezing weather to show their support for anti-fascists in Greece facing terror attacks from the Nazi Golden Dawn movement.
They were part of a worldwide demonstration involving tens of thousands of antifascists around the world expressing solidarity with Greek antifascists.
The Golden Dawn party is spreading its activity beyond Greece, across Europe and North America and there are reports of it being active in the North of England.
Speakers at the rally in Holland Park included Searchlight editor Gerry Gable, the veteran Labour politician Tony Benn, Labour MP's David Lammy and Jeremy Corbyn, as well as Steve Hart, a senior officer from the giant Union Unite and joint chair of the UAF. Other speakers included  Elizabeth Mantzari, one of the leaders of the Greek solidarity movement, and a Turkish antifascist.
Also on the platform were two representatives of the new generation of British anti-fascist writers, Dan Trilling and Owen Jones, NUS Black Students’ Officer Aaron Kiely and an activist from Sikhs against the EDL.
All the speakers stressed the need to build and strengthen international solidarity against fascism and to build upon the long-established No Platform policy in dealing with the fascists.
A small counter demonstration of British fascists, including members of the National Front, was kettled by police.
Posted by london communists at 1:12 pm No comments: 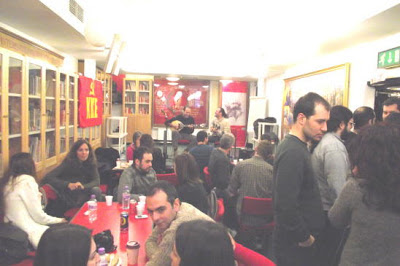 by New Worker  correspondent
COMRADES and friends gathered for a New Year party organised by the British branch of the Communist Party of Greece (KKE) in London’s historic Marx Memorial Library last Sunday.
Theo Russell from the NCP joined other friends of the Greek communist movement to hear live bouzouki guitar and revolutionary songs as well as taste superb home cooked traditional Greek food in a warm and relaxed atmosphere. He had friendly chats with many KKE comrades as well as comrades from the Communist Party of Britain.
Let’s hope this excellent social becomes an annual event!
Posted by london communists at 1:07 pm No comments:

THE FATHER of an autistic boy last week expressed anger at the Metropolitan Police when the force decided to appeal against a Court ruling awarding the boy compensation for an assault by police officers at a swimming pool.
The child, known only as ZH, has severe epilepsy and autism. He was on a school trip to Acton baths in west London and became fixated by the water and stood at the poolside staring into it for around half an hour.
His carers told swimming pool staff that his behaviour was consistent with his condition and that he had to be given time to move away of his own accord. But the manager called the police.
When they tried to take hold him, ZH jumped into the pool. The water was chest high; he was not in danger but he was terrified of any stranger trying to get hold of him.
As police tried to drag him out forcibly the boy struggled and was restrained with handcuffs and leg irons, then put in a cage
Central London County Court heard that the experience exacerbated ZH's epilepsy and he was diagnosed with post-traumatic stress disorder.
In a significant ruling against the Met, the judge Sir Robert Nelson found the force had subjected ZH to inhuman or degrading treatment and to unlawful discrimination because of his disability. He awarded the boy almost £30,000 in damages.
Now the Met is to appeal against this ruling, saying it will affect their operational effectiveness.
ZH's father said: "The thousands of pounds of public money spent by [Metropolitan Police] Commissioner Hogan-Howe defending the indefensible would be much better spent requiring his officers to treat people with disabilities humanely."
Posted by london communists at 1:00 pm No comments:

Email ThisBlogThis!Share to TwitterShare to FacebookShare to Pinterest
Labels: police 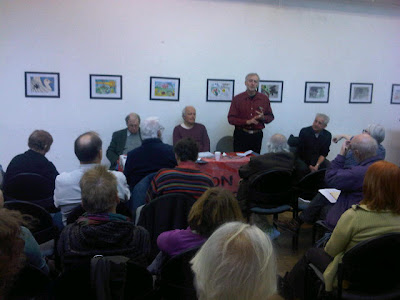 JEREMY Corbyn MP addressed the annual general meeting and conference of London Campaign for Nuclear Disarmament held at  the Conway Hall last Saturday. The AGM also heard around up of reports from local CND and peace groups in the city. London CND Chair Jim Brann gave a presentation on United States foreign policy after the last election where it was noted that arms expenditure continues to be high and the policy remains the same, with the current interference in Syria which has been on-going under previous administrations.
Posted by london communists at 8:03 pm No comments: