Day of Action for Korea

London communists took part in a Day of Action for Korea last weekend, which included a picket of the new American embassy in Nine Elms and a film show in the evening at the Marchmont Centre.
NCP London Organiser Theo Russell joined the afternoon protest outside the embassy that called for an end to US imperialism’s hostile policy towards the Democratic People’s Republic of Korea (DPRK), and for the USA to finally end the Korean War and sign a peace treaty with the Democratic Korean government.
The picket was called by the Korean Friendship Association (KFA). and NCP leader Andy Brooks called for even greater efforts in the year to come at the KFA AGM that took place later that evening.
Posted by london communists at 11:23 am No comments: 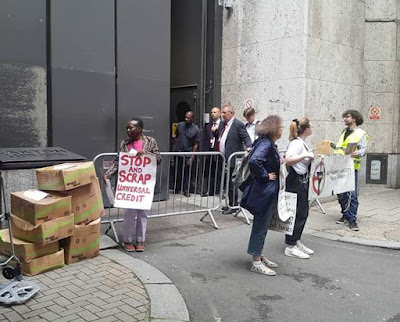 Disabled People against the Cuts (DIPAC) and the Kilburn Unemployed Workers Group were out in force outside the headquarters of the Department for Work and Pensions (DWP) in London last week. They leafleted passers-by and handed in thousands of Metro newspapers in big boxes addressed to Amber Rudd to complain about the lying advertisement on Universal Credit it ran for nine weeks.
The DWP advert claims to “set the record straight” on “myths” surrounding Universal Credit, stating: “A lot has been written about Universal Credit recently – not all of it correct, sadly.” But the four-page adverts in the Metro, a free tabloid newspaper largely given away on London’s bus and train services system, were dismissed as “propaganda” and an “insult to all disabled people” by campaign groups when they came out last month.
The Disability Benefits Consortium (DBC), a coalition of more than 80 disability charities, has now lodged a formal complaint to the Advertising Standards Authority (ASA) about the ads, which they said were “deliberately misleading” and contained “obvious exaggerations”.
The government claim that Universal Credit supports you if you are on a low income or out of work. Given that disabled people are struggling to get by on Universal Credit, to claim it works is, at best, simply misleading.
The DBC recently surveyed around 500 disabled people about their experience of Universal Credit. The survey highlighted some serious concerns and deeply worrying findings. The majority of respondents who moved from Employment Support Allowance (ESA) onto Universal Credit said they now get less or a lot less money than they did previously. People told us that the impact of having less money includes struggling to pay for food (70 per cent), driving a significant number of people to food banks (35 per cent) and a worsening of people’s health, in particular their mental health (85 per cent), and most worryingly driving people to consider suicide.
The ads cane out at the same time as a report by UN Special Rapporteur on extreme poverty Philip Alston that said the scheme was “fast falling into Universal Discredit”.
Ann Galpin, chair of the National Union of Journalists (NUJ) disabled members’ council, described the campaign as propaganda and said: “We are appalled that these misleading wraparounds and features have appeared in the Metro
today, coinciding with the release of Philip Alston’s report on poverty in the UK, which heavily criticises austerity and welfare reform.”

Kilburn Unemployed Workers believe that together we are stronger. By standing together we can defend our rights and win changes that everyone wants. They hold regular meetings and picket the Caxton House HQ of the DWP on the first Friday of every month from 12 noon. Their campaign is supported by Brent Trades Council, the representative body for trade unionists in Brent.
Posted by london communists at 11:19 am No comments: 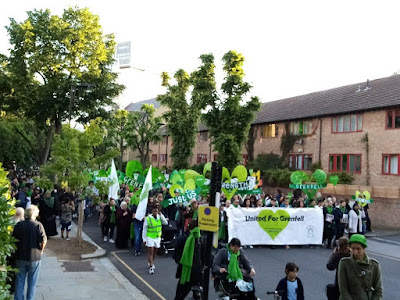 Thousands of people from the local community, trade unionists from London and across Britain, and a contingent from Hammersmith, Fulham, Kensington and Chelsea Trades Council joined a highly emotional, silent march in North Kensington last Friday, two years after 72 people were lost in the Grenfell Tower fire.
There is anger in the local community at the fact that two years on no-one has been held accountable and no arrests have been made. Some survivors are still living in hotels whilst across Britain tens of thousands are still living in unsafe buildings.
The march was joined by Labour leader Jeremy Corbyn, rappers Stormzy, Lowkey and Akala, firefighters and about 60 ‘Riders for Grenfell’ bikers. There were banners from the Fire Brigades Union, Dundee Trades Council and Barnet Unison.
Speaking before the march, rap artist Akala said: “This tragedy was not an accident, it was the product of a philosophy that says some lives have value and some don’t. People were warned but people ignored those messages.”
The Justice 4 Grenfell Campaign issued a ‘Message of Solidarity’ that said: “We will continue to speak out on the injustices surrounding the fire at Grenfell tower and keep it in the public domain; we will continue to demand that the public inquiry keeps ‘people’ at the heart of the process; we will continue to demand changes in laws and regulations, to prevent another disaster like Grenfell happening; we will continue to make demands so that everyone has a home where they are safe. Your continued support will be critical to this.
“The North Kensington community needs and appreciates your support at this difficult time. We are with our community today. We are standing with Grenfell today and we want to say a heartfelt thank you to you for standing with us too.”
The silent march was held a day before the national Grenfell march from Whitehall to parliament.
Posted by london communists at 11:41 am No comments: