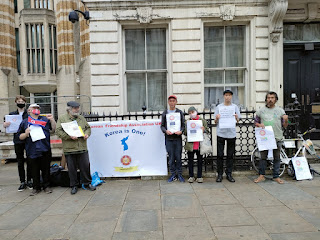 by New Worker correspondentNCP leader Andy Brooks joined Korean solidarity activists who were picketing the Foreign Office in central London last weekend. London comrades joined the demonstration in Whitehall on Saturday that was supported by other labour movement activists and friends of the DPR Korea campaigning for peace in Korea and an end to sanctions against the DPRK.
The protest, called by the Korean Friendship Association (KFA), highlighted Britain’s involvement in new American provocations on the Korean peninsula that include the current military exercises in south Korea and the despatch a Royal Navy carrier strike force to Korean waters.
Millions of pounds are being squandered to do the bidding of US imperialism in taking part in war games that are a direct violation of the inter-Korean agreements of 2018 and the DPRK-US joint statement which were hailed by the world as giving the hope of peace.
The last KFA picket in Whitehall was back in September 2020. But pickets had been a regular feature of KFA work in the capital before the lockdown. Now after an 11 month break due to Covid restrictions the solidarity movement plans to return to public campaigning on the street. KFA Chair Dermot Hudson said future plans include resuming public meetings in London and returning to Whitehall on a regular basis throughout the year.
Posted by london communists at 6:16 pm No comments: 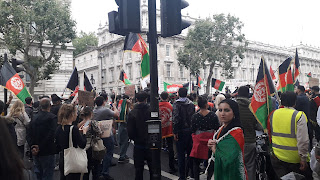 by New Worker correspondentThousands of protesters, mainly from the Afghan community in Britain, marched through central London last weekend to call for an end to Pakistani interference in their country and "immediate action" from the international community to stop the Taliban.
The “Free Afghanistan – Sanction Pakistan” demonstration was supported by the Afghan Association Paiwand, a charity dedicated to helping refugees and asylum seekers in the UK and a number of other groups of Afghan exiles including supporters of the old king and the recently toppled puppet regime. But some remembered the good old days of the Afghan people’s republic which overthrew the old order in 1978 and outlived the Soviet Union until it finally fell to the imperialist-armed Mujahadeen militias in 1992. At least four of them bought copies of the New Worker on the day.

Posted by london communists at 6:10 pm No comments:

British forces out of Ukraine! 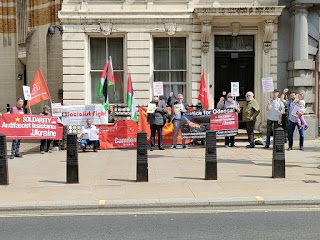 NCP leader Andy Brooks joined other anti-fascist campaigners in London protesting against the British government’s policies towards Ukraine.
Last Saturday’s picket, opposite Downing Street in Whitehall, called on the Johnson government to withdraw British forces from the Ukraine and the Black Sea. They called on the British government to end all military, financial and political support for the regime in Kiev which was installed in the 2014 coup, a coup violently supported by armed, Nazi ‘Right Sector’ gangs and the rabidly anti-semitic Svoboda party. They also drew attention to the role of the fascist militias in Ukraine’s National Guard, which now legally patrol the streets of Ukraine’s cities alongside the civil police.
Campaigners want the Johnson government and the Foreign Office to clarify their position on the lack of democracy, attacks on journalists, the closure of newspapers, TV and radio stations (most recently in February this year), and the blatant human rights violations and involvement in crime by the ‘Azov Battalion’, the ‘National Corps’ and many other violent groups with white supremacist, anti-semitic and openly Nazi beliefs.
The National Corps’ estimated 10,000-15,000 members are legally allowed to patrol the streets of Ukraine's cities, working side by side with the Ukrainian police. Its slogan is “Strength, Welfare, Order”.
The National Corps was created by the Azov Battalion as its own political party in 2016, and its core membership came from the Azov Battalion and the Azov Civil Corps, a civilian organisation affiliated to the fascist battalion. It has gained a reputation for violence, corruption and involvement in crime
This is of major significance for UK government policy as a British military contingent has been in Ukraine since February 2016 training members of the Ukrainian armed forces (UAF). The Azov Battalion and many other ultra-right armed militias are now part of the Ukrainian armed forces after they were admitted into the country's National Guard.
Since 2014 the UK has had an Army contingent in Ukraine to train Ukrainian soldiers - quite possibly including members of the fascist militias integrated into the UAF.
Last year the Johnson government signed a major military deal to set up new British bases in Ukraine. In September 2020 over 200 members of the British Paratroop Regiment joined military exercises in southern Ukraine. Last month the UK and Ukraine signed a Memorandum of Implementation for the “joint UK-Ukraine design and build of warships (and) construction of two naval bases” on board the very same ship, HMS Defender, which sailed through waters Russia considers its own on 23rd June, causing a major diplomatic incident.
Members of the New Communist Party of Britain, Socialist Fight, Third World Solidarity, Communist Fight, Solidarity with the Anti-Fascist Resistance in Ukraine, International Ukraine Anti-Fascist Solidarity and other labour movement organisations took part in the protest. Not the first and certainly not the last. NCP London organiser Theo Russell says more solidarity actions are on their way, following the easing of the lockdown, to raise public awareness about what is really going on in the Ukraine and the Donbas.
Posted by london communists at 12:18 pm No comments: