Fascism and war in the Ukraine

Comrades met in central London on Monday to reflect on the past five years of fascist terror in Ukraine and discuss plans for future solidarity work in London.
Theo Russell from the New Communist Party, Gerry Downing of Socialist Fight who was expelled by Labour on trumped-up charges of ‘anti-Semitism’, and Marie Lynam, a Posadist who is a Labour Party activist and supporter of the Labour Representation Committee,  spoke at the meeting, chaired by NCP leader Andy Brooks, at the Calthorpe Arms in the Gray’s Inn Road.
The 22nd February marks five years since a Latin America-style coup ushered in an illegal regime in Ukraine in which avowed fascists and virulent anti-Semites are running the government of a European state with 45 million people.
Dozens of openly Nazi heavily armed militias have been welcomed into the Ukrainian army, and are now conducting “joint patrols” with the police in many cities to “maintain Ukrainian order”.
Adherence to fascist, openly Nazi ideology goes right to the very top of the current US and European Union-backed government in Kiev. This is one of the dirtiest secrets which western governments are hiding from their peoples and covering up with an avalanche of fake anti-Russian propaganda.
After taking office in 2014, Ukrainian President Petro Poroshenko publicly identified himself as a ‘Banderite’, that is a follower of Stepan Bandera, whose faction of the ‘Organisation of Ukrainian Nationalists’ collaborated with Nazi Germany in the massacres of 1.5 million Jews and 70,000 Poles during the Second World War to “cleanse” Ukraine.
And only last July an adviser to Poroshenko and his defence minister, Yuri Biryukov, wrote a Facebook post using the neo-Nazi symbol ‘1488,’ an internationally shared neo-nazi code which combines the “14” words of an  American white supremacist message and the repeated eighth letter of the alphabet which stands for ‘Heil Hitler’.
The Azov Battalion is the most powerful of about 80 fascist militias, which have been incorporated into a US-trained and equipped national guard, part of the Armed Forces of Ukraine. Its symbol is based on the Nazi SS ‘Wolfsangel’. The battalion is backed by Ukraine’s Interior Minister Arsen Avakov, who belongs to Poroshenko’s ‘respectable’ ruling party, the Petro Poroshenko Bloc ‘Solidarity’.
In 2014 the chief rabbi of Ukraine, Yaakov Bleich,  denounced Avakov for appointing of the fascist deputy commander of Azov, Vadym Troyan, police chief for the capital, Kiev. He demanded: “if the interior minister continues to appoint people of questionable repute and ideologies tainted with fascism and right-wing extremism, the interior minister should be replaced”. And yet, not a word from London, Washington or Brussels!
The British government has sent military advisers to train Ukrainian troops and it has also provides political and propaganda support, all in the name of the ‘Russian threat’.
Recently it has sent warships to the Black Sea, stepping up tensions, and in December the Donetsk People’s Republic claimed that Britain’s Special Air Service was planning “to capture Donetsk People’s Republic People’s Militia commanders and fighters”, and that “British career servicemen, including a Special Air Service unit” were present on the Gorlovka axis,” in other words on the front line of the conflict.
It is very unfortunate that by far the most dangerous manifestation of fascism in Europe has been ignored by anti-fascist organisations in Britain and elsewhere. This is because they have fallen into the trap of western anti-Russian hysteria. But this will not prevent genuine anti-fascists from organising solidarity with all anti-fascists in Ukraine, including many thousands in exile, and the Lugansk and Donetsk People’s Republics which rebelled against the new fascist junta.
The meeting finally closed with a collection to pay for the room while some comrades stayed behind to continue the discussion in the bar below.

Posted by london communists at 9:55 am No comments: 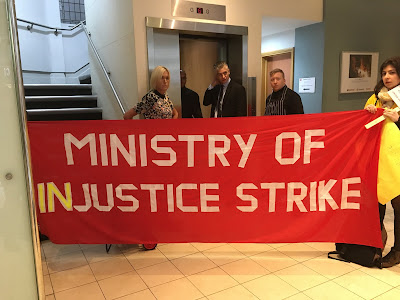 Seeing that Gauke had been ignoring their messages and refusing to meet tem, the protesters  decided they'd pop over to the 9 am event he was holding around the corner from his office at the Ministry of Justice.
Dave and his hosts, the Conservative ‘Reform’ think-tank, weren't impressed and called the police on a group of workers, including mothers with children, in an attempt to intimidate and discourage the workers from making their voices heard. The Justice Minister then ran out of a back door, ashamed to face his workers.
The protest was called by the United Voices of the World (UVW), a street union founded in 2014 to represent the mainly outsourced migrant workers of London. Their message to Gauke and his accomplices is: Dave, we will be back. Wherever you speak, we will be there. You can continue to run away from your workers but you cannot hide. See you at the next event.
The UVW is a members-led, campaigning trade union which supports and empowers the most vulnerable groups of precarious, low-paid and predominantly migrant workers in Britain.
The new union rapidly gained media attention and popular support with a series of high-profile victories for workers serving Sotheby's, Harrods, and the London School of Economics and in the capital’s other outsourced industries, which include cleaning, portering, security, retail, waiters and bar staff.
The UVW campaign for all members to receive at least the London Living Wage (£10.55 per hour as of November 2018), contractual sick pay and other rights, dignified and safe conditions, and general respect.  The union also challenges outsourcing itself, which creates two-tier workforces in order to slash wage bills and deny important rights.
Posted by london communists at 9:50 am No comments:

Year of the Pig in London


London hosted one of the largest Chinese New Year celebrations outside Asia on Sunday, drawing tens of thousands of visitors to the heart of the capital to share the joy.
The celebration began with a grand parade featuring 30 teams, including a Chinese Dragon and Lion team, an iconic London double-decker bus and a variety of floats, streaming through the streets from Trafalgar Square via the West End before reaching its final destination, Chinatown.
More live entertainments were presented on the many stages set up around Chinatown, and a martial arts and cultural zone was also put up to offer a show of Chinese handicrafts, Chinese zodiac animals and a dim sum feast.
Despite some drizzle, visitors' enthusiasm remained high for the celebration to mark the arrival of the Year of the Pig, the last of the 12 Chinese zodiac animals.
Winston Lo, one of the presenters of the stage performances, said that there is “a growing and greater sense of eagerness” amongst the British public to participate in the Chinese Lunar New Year celebration as China's cultural influence continues to expand across the globe. “Look at this weather, and thousands and thousands of people are still coming.”
Mayor of London Sadiq Khan, who was amongst the audience in Trafalgar Square, said that London and China enjoy a strong friendship with a “huge link in business, tourism, and students”, and that London remains open to the Chinese and other communities despite Brexit uncertainty. “We see everyday, Chinese community and young people coming to our city making a massive contribution. It's really important that carries on going forward and my message is London is open.
“China has made a massive contribution to world civilisation for centuries. And I'm pleased to see London benefiting from the contribution of the Chinese community as well."
Chinese ambassador to Britain Liu Xiaoming said that the Brits' enthusiasm for the Chinese Spring Festival has been very high, which shows increasingly close ties between China and Britain and a greater eagerness of British people to know about China.
“The Spring Festival is a miniature of China–Britain cultural exchanges. I expect even more fruits to be reaped from China–Britain cultural and people-to-people exchanges in the Year of the Pig,” Liu said.
The Chinese New Year celebrations in London, organised by the London Chinatown Chinese Association (LCCA), began as a small community event in Chinatown more than 20 years ago. The festivities have now become the largest of their kind outside Asia, attracting tens of thousands of people to the capital each year.
Xinhua
Posted by london communists at 11:12 pm No comments: