Give Venezuela back its gold! 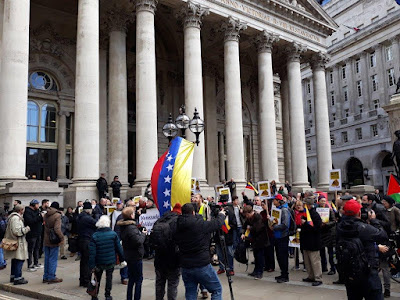 Demonstrators picketed the Bank of England last week to demand the release of 31 tonnes of Venezuelan gold reserves that the bank is holding. Many believe that Britain’s supposedly independent central bank will eventually hand the gold over to the emissaries of Juan Guaidó, the self-proclaimed “interim president’ of Venezuela and a pawn of US imperialism.
Over 150 protesters took part in the protest called by the Venezuela Solidarity Campaign (VSC) in London. There, left Labour MP Chris Williamson repeated the call he recently made in Parliament for supporting dialogue in Venezuela rather than Trump’s illegal ‘regime change’ agenda.
Ken Livingstone, former Mayor of London, who also attended the protest, added:  “The holding of this Venezuelan gold by the Bank of England is part of Britain’s slavish following of Trump’s support for a coup and possible military intervention in Venezuela. Instead of kowtowing to the USA, the UK should support dialogue and a negotiated settlement.”
Doug Nicholls, Vice Chair of the Venezuela Solidarity Campaign, said: “Piracy seems to be up and running at the Bank of England. On the one hand British politicians cry crocodile tears over what they see as impoverishment and hunger in Venezuela, on the other they ignore even the UN’s recognition that much of this has been caused by US sanctions, and to rub salt into the wound they’re trying steal Venezuela’s gold.”
Posted by london communists at 11:58 pm