For Peace in Korea!

Every year the anniversary of the outbreak of the Korean War is marked by the start of the month of solidarity with the Korean people. Last weekend NCP leader Andy Brooks joined other comrades and friends picketing the US embassy in London to demand an end to the American occupation of south Korea and the peaceful reunification of the country that has been divided since the end of the Korean War in 1953.
The protest was called by the Korean Friendship Association (KFA) and supported by the New Communist Party, to mark the 67th anniversary of the war that began with an attack by the Americans and their local lackeys on 25th June 1950 that started the conflict which has still to be resolved. Democratic Korea worked for the peaceful reunification of the Korean peninsula along the lines first laid down by great leader Kim Il Sung in 1973 for a Confederal Republic based on the principle of “one country, two systems”.
KFA Chair Dermot Hudson took the mike to point out that the US imperialists provoked the Korean War against the young Democratic People's Republic of Korea (DPRK) and massacred millions of Korean people. They used biological and chemical weapons, and carried out terrible massacres of innocent civilians. American troops continue to occupy south Korea, exploiting and oppressing the Korean people, applying sanctions against the DPRK and threatening the people’s government with nuclear annihilation.
Dermot Hudson called for the full and total withdrawal of US troops from south Korea and the conclusion of a peace treaty between the DPRK and the USA.
Posted by london communists at 2:42 pm No comments:

A Promising Future for Hong Kong

By New Worker correspondent
NCP leader Andy Brooks joined hundreds of other guests at the Chinese embassy this week at a reception called to mark the 20th Anniversary of the Return of Hong Kong to People’s China.
The Chinese ambassador, Liu Xiaoming, said that the end of British rule “was a landmark in China's modern history. It was a long-cherished wish coming true for generations of Chinese people, including compatriots in Hong Kong.
“It was a significant achievement that left its mark in the history of the Chinese nation.
“It was a pride for each and every Chinese to see Hong Kong's bauhinia flag side-by-side with the five-star national flag. Hong Kong's return to China is a milestone in the history of Hong Kong. After a hundred years of ups and downs, Hong Kong finally rejoined the motherland.
“Hong Kong people have become the masters of the land they call home. And Hong Kong has since entered into a new phase of development.”
The Chinese ambassador said that reunification had finally ended the historical obstacle to closer ties between China and Britain, sending the bilateral relations onto a fast track.
“In the 20 years that followed, the China–UK relationship grew from comprehensive partnership to comprehensive strategic partnership, and then to a global comprehensive strategic partnership for the 21st century. Now this relationship has entered a ‘Golden Era’,” Liu Xiaoming said.
“In late 1970s, Mr Deng Xiaoping, the courageous and insightful leader, first proposed the vision of ‘one country, two systems’. This innovative framework was first applied to the Hong Kong question.
“Twenty years on, ‘one country, two systems’ has been hugely successful in Hong Kong and Macau.
“This policy has shown strong vitality. It has been an enrichment to socialism with Chinese features in both theory and practice. It opens up a creative new way for the peaceful reunification of China. It heralds a new journey towards rejuvenation of the Chinese nation. It strengthens our confidence in achieving the ultimate unification of the Chinese nation.
“Today, Hong Kong is the fourth biggest financial centre, the fifth largest container port and the eighth biggest trading entity in the world.
“Hong Kong is also making steady progress in its democratic governance. From political stability, governance efficiency and regulatory quality to the rule of law, control over corruption, right to expression and accountability, many indicators are showing Hong Kong's improvement over pre-handover years…
“…Hong Kong's return is a major innovation in terms of social and political system.
"’One country, two systems’ is a great invention. It allows the coexistence of the socialist and capitalist systems within one country.”
This is unprecedented in human history. In Deng Xiaoping's words: "Has any government in the history of the world ever adopted a liberal policy like this? Has any western country in the history of capitalism ever done anything like this?"
The successful practice of ‘one country, two systems’ in Hong Kong shows that this solution proposed by China is absolutely feasible. It is a daring and successful experiment with different social systems.”

Posted by london communists at 9:53 am No comments:


IN THE 1990s Tory grandee Lord Heseltine declared that his party would make “a bonfire of red tape” – getting rid of rules and regulations that hindered maximum profit-making and including health and safety regulations.
In 2009 Boris Johnson, as mayor of London, declared that “safety fears” were “making the UK safe for extremely stupid people”.
And in 2011 the then Prime Minister David Cameron said: “I will kill off safety culture; we need to realise, collectively, that we cannot eliminate risk and that some accidents are inevitable.”
On Wednesday morning 14th of June we saw the terrible consequences of their endeavours as the giant Grenfell tower block in Kensington became a flaming inferno in a very short time, because in a cheap cosmetic ‘renovation’ two years ago it had been fitted with flammable plastic and aluminium cladding. This type of cladding has been involved in several fatal fires and is now banned in many countries.
The block was owned by the Royal Borough of Kensington and Chelsea (RBKC), but control and administration had been outsourced to the Kensington and Chelsea Tenant Management Organisation (KCTMO) who supposedly manage all social housing in RBKC on the Council’s behalf.
Responsibility for fire safety inspections was also transferred to KCTMO from the fire brigade as Boris Johnson was making drastic cuts to the London Fire Service.
Tenants had complained for years, over and over again, about fire safety issues and dangerous electrical surges that destroyed some of their appliances. They formed the Grenfell Action Group (GAG) and ended up being threatened with arrest if they did not stop “harassing” the council and its agents.
“All our warnings fell on deaf ears and we predicted that a catastrophe like this was inevitable and just a matter of time,” they said.
The fire that started it all was a small one in a kitchen, which the fire brigade dealt with quickly. They were packing up ready to go when they noticed that the cladding on the outside of the building had caught alight.
From there it quickly turned into the worst fire disaster in Britain since the Blitz. No one is certain about the total number of deaths. The media are giving an estimated number of 79, but local residents and survivors say that the figure is much higher. Firefighters were unable to reach the top eight floors of the 24-storey building and informal estimates of those still missing are in the hundreds.
Since the fire, both the RBKC and KCTMO have effectively gone into hiding. It has been left to local charities, churches and mosques to provide emergency accommodation for survivors. Local residents and retailers rallied round at once providing much-needed bottled drinking water, food, clothing, toiletries and other necessities for those who had nothing but their nightwear.
They waited in vain for council officials to turn up to arrange accommodation and help, until eventually neighbouring local authorities stepped in to the breach. Kensington and Chelsea is the richest borough in the country, but it has totally failed its low income tenants and seems to be paralysed.
The survivors, friends and neighbours descended on the town hall in a rage rarely seen in Britain to demand justice for the victims – but rather than come out and meet them the council boarded up its building and hid.
In the same way, Prime Minister Theresa May has seemed afraid to meet the angry bereaved. The newly elected Labour MP Emma Dent Coad and Labour leader Jeremy Corbyn visited the scene and were able to bring some genuine comfort and sympathy to the survivors.
Corbyn has demanded that empty luxury properties in the borough bought purely as investments should be commandeered to house those who have lost their homes but May has rejected the idea out of hand.
The survivors desperately need to be rehoused within the borough and close together. They have a terrible process to go through in coming to terms with the tragedy and they will be able to comfort each other as no outsiders could. Yet they fear the council will use the opportunity to rehouse them far away, all around the country.
The firefighters too – who had to make terrible decisions about who to save and who to leave; who gave over their own breathing apparatus to victims on the verge of death and risked their own lives – will be haunted for life by the horror and they need help. But the London Fire Service has cut its counsellors down to just two.
The union Unite has promised to provide legal assistance for all survivors seeking justice. The union had many members living in that block.
We must demand that the council and its agents come out of hiding and face the survivors and the bereaved in court. We must also demand the Government fund local authorities throughout Britain to remove that fatal cladding from tower blocks wherever it is in place and fit sprinklers and fire alarms into all tower blocks.
Posted by london communists at 12:17 pm No comments: 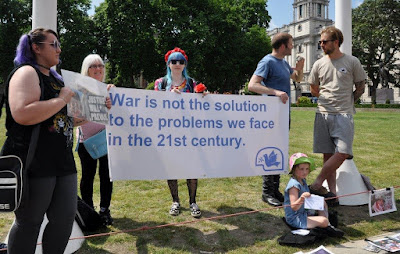 PEOPLE gathered in Parliament Square last Sunday to mark the sixth anniversary of the death of Brian Haw – the peace campaigner who spent almost a decade camped in the Square facing the House of Commons with an array of placards, posters, banners and a microphone reminding MPs of the horrors of war, especially to children.
In 2001 Brian Haw had been affected by the Mariam appeal and the effect of United States sanctions against Iraq on the children there, who could not get enough food or medicines for the cancers that resulted from the use of depleted Uranium weapons in the First Gulf War.
He said he could not face his own seven children if he did not do something, so he began his permanent protest on 2nd June, 2001 and maintained it until January 2001.
Brian Haw had to fight off many attempts by right-wing MPs and Westminster council to have him forcibly removed, and he was badly beaten up by police on more than one occasion. But he attracted the support of other peace campaigners who helped him with his battles, legal and physical, and some joined his camp for a while.
Brian was diagnosed with lung cancer in September 2010 and in January 2011 he left England for treatment in Berlin, funded by his supporters. He died there on 18th June 2011.
The memorial event was organised by Veterans for Peace.
Posted by london communists at 12:26 pm No comments: