By New Worker correspondent
The Conway Hall was packed to the rafters this week to condemn the vicious efforts of the Blairites and Zionists  to undermine Jeremy Corbyn. Hundreds faced a barrage of abuse from a Zionist gang as they piled into the meeting in central London on Tuesday while a hundred more late-comers were turned away on safety grounds.
Inside, the 400-strong audience heard speaker after speaker uphold the legitimate rights of the Palestinian people and  slam the smears that brand Corbyn and the Labour left as “anti-semitic”. Called by the Corbyn, Antisemitism & Justice for Palestine campaign, the meeting was chaired by Christine Blower, a former teaching union leader and the panel included a number of well-known Palestinian and Jewish socialists as well as the author Tariq Ali.
Campaigners, including Lindsey German of the Stop the War coalition and Tariq Ali, called on the left to close ranks around Corbyn and defeat attempts to define any criticism of Israel as “anti-semitic”.
Richard Kuper of Jewish Voice for Labour said: “That the Corbyn project is under attack is in no doubt — from a large proportion of Labour’s MPS and a large proportion still of Labour’s bureaucracy…Labour is also under assault from the pro-Israel lobby which has been alarmed for some time about the prospect of a leader who is in favour of Palestinian rights”.
Huda Elmi,  who is running on the Corbyn slate in this year’s Labour NEC elections, said the mainstream media focus on ‘anti-semitism’ deliberately ignores the Palestinians. “The problem is Palestinians have been completely erased from it. They’re trying to subvert our ability to be loud and unapologetic about being anti-colonial”.
“Talk about the human rights abuses against the Palestinians. We have to turn it back to that. We have stood consistently shoulder to shoulder with Palestinian people. We can’t take steps back from that.”

Posted by london communists at 3:34 pm No comments:

Fascists wearing blackshirts with Nazi-style logos were given a taste of their own
medicine when they tried to disrupt a meeting called in support of the London
bookshop vandalised by Nazis and racists a week earlier. A small group of
supporters of the Football Lads Alliance (FLA) and Generation Identity gathered
outside shouting abuse, but they were immediately chased several blocks away by
an angry crowd chanting “fascist scum – off our streets!”.
London comrades joined many other anti-fascists last Saturday to show their
solidarity with Bookmarks, the socialist bookshop which is the official bookseller for
the TUC. Hundreds came for the rally at the nearby Bloomsbury Baptist Church to
show solidarity after the shop was ransacked by a group of Nazis and racists the
previous week.
Three UKIP members have been suspended after 12 men, one wearing a
Donald Trump mask, jeered Muslims and called the shop staff “traitors”.
Noel Halifax, who was one of the two staff in the shop on the day of the attack,
said that the last time Bookmarks had been targeted was in the 1970s. “The National
Front was around then, and it feels like that kind of atmosphere today,” he said, also
pointing to a recent attack on London’s LGBT bookshop Gay’s the Word.
Dave Gilchrist, the manager of Bookmarks, said: “We have emerged from it
much, much stronger,” and pointed out the hypocrisy of the fascists and racists
involved in the attack, who paint their figurehead Tommy Robinson as a “free speech
martyr”.
David Rosenberg from the Jewish Socialists’ Group read a message of solidarity
from Labour Party leader Jeremy Corbyn, whom he called “my MP, an outstanding
fighter against all racism”.
Weyman Bennett from Stand Up To Racism commented on the far right’s “make
Britain great again” slogan, saying: “What’s not great about Britain? The NHS, black
and white, gay, straight and trans people coming together?”
He called for a united front against the threat of resurgent forces of the British far
right, saying: “Tommy Robinson's supporters had 15,000 on the streets – they are
bigger now than before.
“We built the Anti Nazi League, we built Unite Against Fascism – and we're
building Stand Up To Racism.” But he added: “It is not automatic that we will win this
fight – but what is for certain is that we will fight.”
Finally Unmesh Desai, a Labour member of the London Assembly, said: “We
need to create a hostile climate for Nazis and fascists coming into our communities.”

Posted by london communists at 12:20 pm No comments:

Cleaners at Kensington & Chelsea Council, HealthCare America and the Ministry of Justice, at five different sites, started three days of strike action on 7th August to demand the London living wage, currently set at  £10.20 per hour, and decent sick pay.
The action was organised by the United Voices of the World (UVW), a small independent union that represents low-paid, predominantly migrant workers in Britain. Although small, the UVW has already won the living wage, sick pay and holiday pay for cleaners all over London, including at the Daily Mail, Sotheby’s and the London School of Economics (LSE).
On the day the new strike started, Kensington and Chelsea Council announced that it would be bringing all outsourced contracts with Amey back in-house. Senior local Labour Party sources in Kensington & Chelsea told the New Worker that the council is rapidly implementing huge changes in order to stave off the threat from Labour and shake of the “Grenfell effect”. The Tories lost the parliamentary seat for the first time ever in 2017, and both the chief executive and council leader resigned after Grenfell. They also said similar changes were taking place in Wandsworth, where there is also a growing challenge from Labour.
Posted by london communists at 10:29 pm No comments:

A trades council in the shadow of Grenfell Tower

By Theo Russell
Local trade unionists in West London are mobilising to build support for the first AGM of a new trades union council that kicked off with a meeting in June.
Local union and community activists came together on 27th June at the Maxilla Social Club, in the shadow of Grenfell Tower, to mobilise support for the relaunch of the Hammersmith, Fulham, Kensington and Chelsea Trades Council.
They were addressed by Matt Wrack, Fire Brigades Union (FBU) general secretary, on the latest developments in the public inquiry, alongside Merril Hammer, Chair of Save Charing Cross Hospital, Christine Blower, former General Secretary of the NUT, and Liane Groves, Unite Community National Coordinator. The meeting was chaired by Roger Sutton from the Greater London Association of Trades Union Councils.
Veterans of the old local trades councils along with local trade union and Labour Party activists discussed how to obtain sufficient affiliations to ensure the new combined trades council, which will launch formally at the AGM on 23rd October, can survive as a viable organisation.
Matt Wrack told the meeting that: “Trades councils are at the heart of local communities, and with the fall in trade union membership are needed more than ever to build the links in order to improve peoples’ live.”
“Trade unionism is not just a top-down process, we need them to engage with local disputes and with the wider community who are not in trade unions.”
Wrack spoke at length about the impact of the fire on his members and major problems with the Grenfell Inquiry. He said that about 1,000 firefighters, almost all FBU members, had been questioned by the Metropolitan Police, some for as long as six hours.
With an FBU rep attending each interview, this had been a huge organisational challenge for the union.
He said that London Fire Brigade members were “disgusted” by the treatment of the Grenfell incident commander, Michael Dowden, and said the inquiry was starting in the wrong place by focusing on the fire itself rather than on the long list of bodies responsible for the disaster.
“Those people responsible for the tower’s cladding, the contractors and businesses who sold the materials, are not the ones being asked difficult questions, it’s the people who turned up on the night.”
Wrack said the disaster was caused not just by austerity but by the attacks on public services that began with the 1979 Thatcher government.
“Housing and safety regulations were weakened, building controls part privatised and cut to pieces, and fire regulations fragmented, with firefighters having died as a result. Since 2005, 50 per cent of fire safety officers have been lost and local government budgets have been hardest hit by austerity since 2010.
“The inquiry should look into the past cuts to council housing, public services and local authority resourcing, and the deregulation of the building industry and fire safety testing regimes.”
He added that there was “utter complacency from central government” since the fire, saying: “I have no confidence that the inquiry will bring change. The only way to do that is to organise a huge community movement – that is the only way we will get change, that is the only way we will get justice.
“The UK is the fourth richest country in the world but no longer conducts any fire safety research, and ranks 34th in fire resilience. Eleven thousand firefighters and 40 fire stations have been lost, and there are not enough crews to man the remaining fire engines.”
Posted by london communists at 10:25 pm No comments: 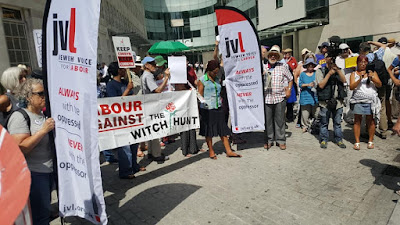 Labour activists picketed Broadcasting House in London on Tuesday to protest at the BBC’s biased reporting and its failure to report fairly and impartially about the attacks on Jeremy Corbyn’s leadership of the Labour Party. The picket outside the BBC’s HQ was supported by a number of rank-and-file movements including Brent Momentum,  Labour Against the Witch-hunt and Jewish Voice for Labour.
Posted by london communists at 1:53 pm No comments: