A real leap of faith!

One of the most difficult and drawn-out aspects of the peace process in Ireland has been that of reconciliation between communities which have suffered divisions dating back centuries – to the 16th century plantations - and which were made even worse by partition in 1921.
From this side of the Irish Sea it certainly appears that most of the efforts to develop reconciliation have come from the nationalist rather than the Unionist side, and particularly from Sinn Fein.
But on rare occasions public figures from the Protestant-Unionist community have emerged who have risked denunciation and attacks by developing ties with Sinn Fein.
The Rev David Latimer, from First Derry Presbyterian Church, was at the Irish Centre in Hammersmith, West London this month to talk about his new book, A Leap of Faith: How Martin McGuinness and I Worked Together for Peace, which describes his strong friendship with Sinn Fein’s Martin McGuinness.
Latimer first met McGuinness, who was deputy first minister of Northern Ireland from 2007 to 2017 (although in reality joint first minister), over 10 years ago, when he asked McGuinness for help in stopping attacks on his church, situated on the edge of the nationalist Bogside in Derry.
It was the start of a lasting friendship which led to Latimer addressing Sinn Fein’s 2011 Ard Fheis (conference) in Belfast, where he received a rapturous welcome, and taking part in rallies supporting McGuinness’s bid for the Irish presidency.
He also spoke at McGuinness’s funeral in 2017, describing him as “one of the great leaders of modern times”.
McGuinness in turn addressed the congregation of First Derry Presbyterian Church after refurbishment work on the building, after he had arranged for a £1.6m grant from Derry City Council to pay for repairs to the church. Such an event would have been unthinkable not only 10 years before, but 100 years ago.
When Latimer first arrived at the church in 1983, in the midst of the 1968-1998 conflict, there was bulletproof glass in the windows and two of its doors were bricked up.
At that time his congregation included members of the Royal Ulster Constabulary and the Ulster Defence Regiment, hated by the nationalist community for their allegiance to the dominant Unionist hegemony, which was backed by the full weight of British imperialism.
During the 1968-1994 conflict nine members of the security forces in Latimer’s congregation were killed. The many such losses on both sides of the conflict are far from resolved and still generate considerable bitterness.
Latimer took considerable risks by befriending McGuinness and working for reconciliation, and hard-line Unionists accused him of siding with “the enemy with blood on their hands”. His church lost around 30 families due to the friendship. But today, Lambert says, “leading members of Derry’s Protestant community admit to being “ashamed at how we used to run this city”.
The huge advances made in Derry since 1998 were highlighted by Elisha McCallion, past mayor of Derry City and successor to McGuiness’s Westminster seat, who also spoke at the launch.
McCallion said Latimer’s experience “shows that even a minority Protestant community is treated with as much respect as any other community”.
But she also pointed out that major elements of the St Andrews and Good Friday agreements, on Irish language rights, community equality and finding resolution for victims of the conflict remain to be implemented, “a situation neither of the governments in London or Dublin seem very bothered about”.
“The Irish government could do a lot more to develop those relations than they have in the past”.
Reconciliation between the communities has been the central plank of Sinn Fein’s policies since 1998, and has brought about many positive changes. But unfortunately the diehards in the Unionist community - including DUP leader Arlene Foster - continue to inhabit a past in which every Sinn Fein member is still an “IRA terrorist”.
As former New Communist Party leader Eric Trevett pointed out as the peace process dragged on, "it is always far harder for those with power to give it up than for those who were dominated," and that is certainly being proved in the north of Ireland today.
But despite the antediluvian attitudes of the bible-bashing DUP, enormous strides towards reconciliation have been made right under their feet. The times are moving on despite the dwindling numbers of Loyalist bigots.
For those who recall the tortuous negotiations the years before 1998, time and again the collapse of the peace process looked inevitable. But the Good Friday settlement went to gain mass support on both sides of the partition border, now known in Ireland as "the British border in Ireland". That mass support is still there 21 years on.
Latimer did indeed have to pay a price for his friendship with McGuinness, but like the leaders of Sinn Féin he risked a far worse fate. No wonder his efforts have won him so much respect from the republican and nationalist communities.

Posted by london communists at 4:47 pm No comments:

Justice for the Palestinians!

Comrades and friends returned to the Cock Tavern in central London for a discussion on the Palestinian cause opened by a panel that included New Communist Party (NCP) leader Andy Brooks and Salim Alam from the Palestine Solidarity Campaign (PSC).
The speakers looked at past and present attempts to achieve a settlement to the seven decades-long Arab–Israeli conflict. As well as bringing peace to the Middle East, any settlement must meet the legitimate demands and rights of the Palestinians if it is to succeed. No matter how far off it seems now, that remains the only realistic and acceptable goal for the Palestinians and the wider Arab world.
Chaired by Theo Russell, the NCP London Organiser, the well-attended meeting heard the two speakers talk about building solidarity with Palestine in the peace and labour movement.
Salim Alam said the most effective way to support the Palestinians was to back the Boycott, Divestment, Sanctions (BDS) movement that works to end international support for Israel's oppression of Palestinians and pressure Israel to comply with international law. Andy Brooks agreed, pointing out the need to close ranks around the needs of the day to uphold the legitimate rights of the Palestinian people.
The far-ranging discussion that followed covered the Blairite and Zionist attempt to drive pro-Palestinian supporters out of the Labour Party and the need to raise the solidarity campaign to an even higher level in the unions and the peace movement.
This Irish pub in Euston is a well-known haunt for the labour movement and the NCP London District plans to hold more events there now that the meeting room has been reopened after being closed for some time for extensive repairs.
Posted by london communists at 11:10 pm No comments: 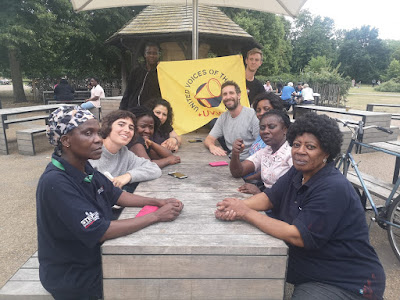 Workers who clean and maintain London’s world-famous Royal Parks are set to walk out on strike in protest at poverty wages, causing a major embarrassment for Buckingham Palace.
The cleaners, who scrub toilets and other public facilities in some of the capital’s most iconic green spaces – including Hyde Park, St James’s Park and Kensington Gardens, all of which are hereditary possessions of the Crown and managed by the Government on behalf of the Queen – are currently paid just £8.21 per hour, well below the basic London Living Wage.
“I have worked at the Royal Parks for 24 years but these poverty wages mean that, like many of my colleagues, I’m living a hand-to-mouth existence,” said Genevive Boohene, a Ghana-born Royal Parks cleaner. “We are denied occupational sick pay, many of us do not receive our legal entitlement to holidays, and managers ignore our suffering and concerns. Now we are coming together to change things for ourselves.”
The workers, who have been serving the Royal Parks for nearly 200 years between them, are fighting to be paid the London Living Wage of £10.55 per hour – an independently calculated figure representing the minimum income that a worker in the capital needs to get by. They are also demanding occupational sick pay and full statutory holiday entitlement, to bring them in to line with the basic protections enjoyed by most UK workers.
Cleaning staff will ballot formally for strike action in two weeks’ time, after joining United Voices of the World (UVW) – a street union founded in 2014 to represent the mainly outsourced migrant workers of London and beyond. Having already racked up a series of high-profile victories against major companies and organisations in recent months, including Topshop, Chanel and the Royal Borough of Kensington and Chelsea, UVW is now setting its sights on the Royal Parks, which manages over 5,000 acres of Royal parkland across the city.
The Royal Parks are used by approximately 80 million people per year and any strikes are likely to fall within the school summer holidays, when visitor numbers are at their highest. In a move that will pile further pressure on management, office staff at the Royal Parks who are represented by the PCS civil service union say they’ll back the cleaners’ action.
Posted by london communists at 10:56 pm No comments: