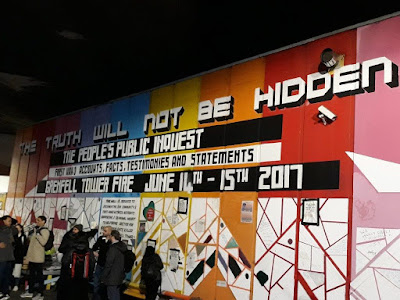 Several hundred people from the local community along with many trade unionists joined the 21st Silent March for Grenfell last week, including Fire Brigades Union general secretary Matt Wrack. The dignified and very moving event remembering the 72 people who died in the fire starts from close to the Grenfell Tower every month, and on this occasion ended with calls for justice and change from local community activists including the rap artist Lowkey.
Last week campaigners heard that no criminal charges will be made against the organisations and individuals responsible for the fire until at least 2021. Tasha Brade from the Justice for Grenfell campaign said: “Why do the police have to wait until the Grenfell Inquiry is over before taking action? Aren’t they carrying out their own investigation? So far we know that 11 people have been questioned under caution but we’ve got no idea who they are. Our community wants justice for the victims of the fire and we want it as soon as possible.”
Posted by london communists at 5:51 pm