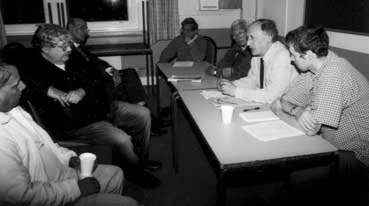 COMRADES and friends gathered in the Marchmont Community Centre in north London last Thursday to discuss the complex struggles taking place now in South Asia at a New Worker meeting, organised by the New Communist Party London District and chaired by Neil Harris.
Speakers included Pakistani trade union and civil rights activist and campaigner against bonded labour Mukhtar Rana, north London Labour Councillor and Third World Solidarity representative Mushtaq Lasharie, Kumar Sarkar from the British South Asia Solidarity Forum, Theo Russell from the New Communist Party and Suresh from the Nepali Samaj Society.
Mushtaq Lasharie began speaking about the current situation in Pakistan in the run-up to the coming presidential election. “President Musharraf is the most powerful man in because he is in uniform; he is the head of the army.” Musharraf has agreed to take off his uniform and quit the military in order to improve his chances of returning to power in the election.
“This presents a dilemma for the people of Pakistan,” said Lasharie, “the people don’t want to accept Musharraf in or out of uniform but they are afraid of putting up a candidate against him because this will legitimise the election. The alternative is to let Musharraf be returned unopposed. Supporters of a boycott could end up being excluded from the political process.”
Mukhtar Rana explained that Musharraf had taken power in a military coup accusing the former President Sharif of corruption. Sharif, a big landowner, had attacked the Supreme Court while the army – dominated by landowners – stood by.
“Musharraf claimed the credit for defending the court, putting an end to corruption – but he was the most corrupt of all.
“President Benazir Bhutto of the People’s Party promised good things for the working class. She fooled them; promising land reforms that would limit land holdings to 25 to 30 acres. Now there are giant estates of thousands of acres. The land reforms were not implemented. Benazir did not implement the reforms because she is a big landowner herself.”
He went on to explain that currently the United States is supporting Benazir Bhutto in the election while the British government is supporting Sharif to return, “but they are all corrupt”. Kumar Sakar spoke of changes in Indian society where a new middle class is emerging among the intelligentsia and those with well paid jobs in the IT sector who lived in comfortable enclaves with security guards.
“The new India is emerging as a super power,” he said, “but the other side of the story, the Dalits or untouchables and other disadvantaged groups like building labourers, women, Muslims and so on.”
He went on to give a history of effects of British imperialism – and now American imperialism – on developing Indian society.
Comrade Suresh explained that the monarchy in Nepal is only 250 years old. Most people are landless and were born into landlessness. But over the last couple of decades Maoist revolutionaries have taken over the remote areas and implemented land reforms.
They have brought of lot of social advances, for example illiteracy has been reduced from 33 per cent to five per cent. “The Maoists led a military struggle that forced the King to return power to the parliament and became part of a ruling coalition and were in charge of five ministries. But the government has come under pressure from the United States to suppress the Maoists and the people.”
The Maoists have been forced to quit the government because of corruption.
Theo Russell introduced a Marxist-Leninist slant on the reports already given. He said that US plans to dominate the world had failed through the Iraq War and that imperialism’s hopes of imposing a New World Order were “now a distant memory”.
There followed a deep and constructive discussion of all the issues raised.
Posted by london communists at 11:51 am