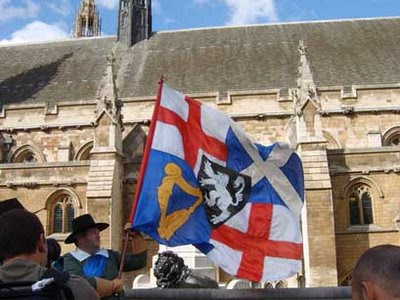 RE-ENACTORS from the Parliamentary Army of the English Civil War Society carried the Commonwealth’s flag on Cromwell Green at the House of Commons on Wednesday 3rd September to marked the 350th anniversary of the death of Oliver Cromwell, the MP who led the New Model Army and became head of state of the English republic in 1653.
The occasion was marked by the Cromwell Association’s annual commemorative service beneath the recently restored imposing statue of the Lord Protector outside Parliament. Conducted by John Morrill, a leading authority on the period, the service included contemporary prayers and hymns. The ecclesiastical business was supplemented by an address by Professor Barry Coward of King’s College London.
He gave a necessarily speculative account of what Oliver Cromwell was thinking about his life’s work . While Cromwell’s final illness was worsened by news of the death of his daughter and political divisions among his supporters there is every sign that he retained confidence that he had done the right thing in the eyes of God.
Further details about the Cromwell Association can be found on their excellent website at http://www.olivercromwell.org/. Enquiries about membership, which includes their annual historical journal Cromwelliana should be sent to Gary Barker, 18 Healey Road, Scunthorpe DN16 1HW.
Posted by london communists at 2:31 pm