A gala of poetry in London 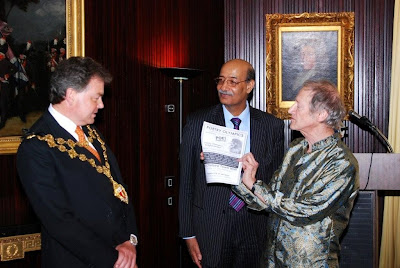 Poets and singers gave the media a taste of things to come last Friday at the launch of the Poetry Olympics Enlightenment festival that will revolve around shows at the 100 Club in Oxford Street and venues in Kensington and Chelsea. The Poetry Olympics began in 1980 as an artistic response to the philistine stance of the Tory Thatcher government, This year’s gala is being held to mark the 50th anniversary of the poetry magazine, New Departures, to give Londoners the opportunity to hear avant-garde progressive poetry and music from some of the giants of the genre. Kensington & Chelsea mayor Timothy Coleridge and local Labour councillor Mushtaq Lasharie of Third World Solidarity welcomed poets Michael Horovitz, Mahmood Jamal and Molly Parkin along with singer-song-writer Alexander D Great at the launch of the festival which begins with a show at Chelsea Town Hall, King’s Road, on 11th September. More details in the diary column or from the POE website: http://www.poetryolympics.com/
Pic: Mayor Coleridge and Councillor Lasharie and Michael Horovitz discussing the POE programme.
Posted by london communists at 3:22 pm