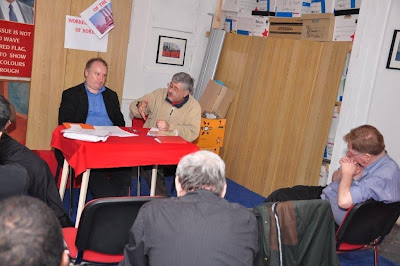 By a New Worker correspondent
NCP general secretary Andy Brooks joined other communists at a seminar last week to celebrate the 65th anniversary of the Workers Party of Korea (WPK). Chaired by Dermot Hudson, the seminar organised by Friends of Korea (FOK) and held at the London HQ of the RCPB(ML) heard contributions from FOK activists and members of the audience on the achievements of the WPK and its leaders over the years.
The NCP leader praised the feats of the WPK and denounced the hostile propaganda of imperialism against the DPRK in his contribution. Michael Chant of the RCPB (ML) spoke about the importance and significance of the WPK and the great role of Kim Il Sung and Kim Jong Il and Dermot Hudson gave a succinct history of the Korean communists’ revolutionary struggle from its earliest days to last week’s historic conference in Pyongyang.
DPRK London diplomat Jang Song Chol told the meeting about the importance of last week’s special WPK conference that re-elected Kim Jong Il to the post of general secretary of the Party, filled a number of other important Party posts and made some amendments to the rule-book.
The meeting concluded with the unanimous agreement to send the following message congratulating Kim Jong Il on his re-election last week.

Your unanimous re-election as General-Secretary of the WPK is testimony to the resounding confidence of the Korean people in your Songun revolutionary leadership based on the Juche principle, and in building a powerful and prosperous nation and a socialist system of the Korean people’s own choosing.

We also send our congratulations to all members of the WPK on the successful conclusion of the historic conference of the WPK and its important decisions to further strengthen it to fulfil its responsibilities under the national and international circumstances which it faces.

May we wish you on this occasion good health and long life, and assure you that we stand shoulder to shoulder with you in our common cause of building a new world, the world of peace, independence and socialism.

Seminar organised by the Co-ordinating Committee of Friends of Korea

photo: Dermot Hudson and Andy Brooks
Posted by london communists at 12:10 am