Standing by the Seoul workers 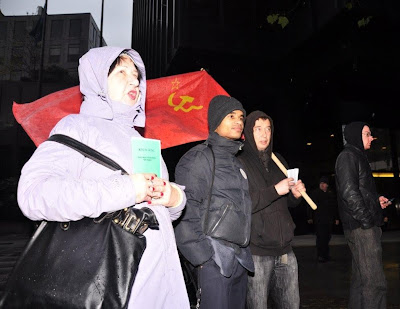 NEW WORKER supporters joined others outside the south Korean embassy in London last Friday to condemn the puppet regime for its ongoing repression in the occupied south of the Korean peninsula.
Called by “Smash G20” the picket was called in solidarity with the workers who are defying police terror in south Korea to demand civil rights and an end to the American occupation.
For several hours they stood in solidarity with south Korea’s political prisoners and the protesters who had taken to the streets to condemn the puppet regime during the G20 summit in the south Korea capital last week. There was a heavy police presence outside the embassy and one protester was arrested for refusing to move away from the entrance.
Posted by london communists at 2:53 pm