Celebrating the Workers Party of Korea 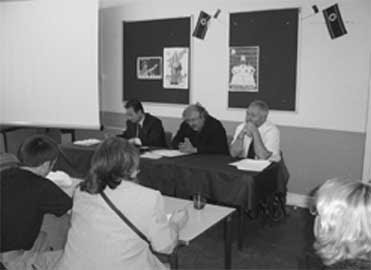 by a New Worker Correspondent
THE MARCHMONT Centre in central London was packed on Sunday for a Friends of Korea celebration to mark the founding of the Workers’ Party of Korea on 10th October 1945. It kicked off with a film show focusing on Korean leader Kim Jong Il’s work at home and abroad followed by keynote openings on the struggle of the Korean revolutionary movement by NCP leader Andy Brooks and Jong In Song from the Democratic Korean embassy in London.
Andy Brooks charted the history of the Korean communist movement which he said was inseparable from the life of Kim Il Sung, an outstanding communist leader and thinker who will always be remembered by working people all over the world. It began when in the 1920s when Kim Il Sung was the student leader who formed the Down with Imperialism Union. From student leader Kim Il Sung became the guerrilla leader; the ‘Young General’ who took up the gun to drive the Japanese colonialists out of the country. When Kim Il Sung gathered a small band of heroes to form the first guerrilla units to take on the might of the Japanese Army no one could have imagined that this would become the People’s Army that brought the American imperialists to their knees begging for an armistice in 1953.
Juché
Comrade Jong talked about the Workers’ Party of Korea, a monolith party based on Kim Il Sung’s thinking that developed Korean style socialism into the Juché idea – which elevates the philosophical principles of Marxism-Leninism as well as its economic theories – and focuses on the development and importance of each individual worker, who can only be truly free as part of the collective will of the masses.
Both spoke of the immense achievements of the DPR Korea under the leadership of Kim Il Sung and Kim Jong Il in raising the standard of living for the Korean masses of the north while upholding the banner of socialism at home and in the international working class movement.
Many friends in the audience had been to the Democratic People’s Republic of Korea and this was reflected in the general discussion that followed. The meeting agreed unanimously to send a solidarity message to Korean leader Comrade Kim Jong Il and then adjourned to relax and enjoy a buffet of Korean food and drink.
Friends of Korea is supported by the NCP, RCPB (ML), CPGB (ML), SLP and friends of the Korean people in the broader labour and peace movement. The society organises regular meetings and socials in London throughout the year and it hopes to hold other events across the country in 2008.
photo: Andy Brooks makes his points
Posted by london communists at 11:10 am