The march they couldn't ban 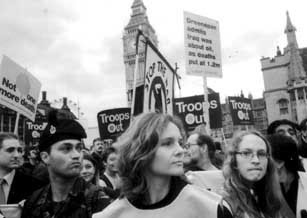 by Daphne Liddle
THOUSANDS of peace protesters gathered in Trafalgar Square on Monday morning to call for an immediate withdrawal of British troops from Iraq and Afghanistan and to defy a ban on demonstrations in Parliament Square.
Police had refused permission for the march, organised by the Stop the War Coalition, to Parliament to mark the first day back from summer recess for MPs and a debate on the Iraq War. To do this they used a law dating from 1839 used to bar Chartists from approaching Parliament.
But as large contingents of students arrived noisily in the Square – from Manchester University Students’ Union, Leeds Nottingham, London and many other places – clearly in an upbeat mood and ready for a confrontation if necessary, the police wisely granted permission for the march just 40 minutes before it was due to begin.
There were many other protesters – all the usual left-wing political groups, peace groups and community groups and a surprisingly good number of trade union banners.
The Communication Workers’ Union was present in force – the striking Royal Mail workers had staged a rally of their own in the Square before the peace rally and many members stayed on to support the Stop the War rally.
A long and powerful line-up of speakers in the Square all emphasised that the police decision to allow the march was based entirely on the weight of numbers who had come – a real demonstration of people-power against Government attempts to restrict civil rights.
Veteran peace campaigner Walter Wolfgang – famous for being thrown out of the Labour Party conference two years ago for daring to heckle Jack Straw – opened the speeches.
Other speakers included Brian Haw, who has maintained a protest picket opposite the House of Commons since June 2001, Stop the War leader Lindsey German, CND general secretary Kate Hudson, MPs Jeremy Corbyn (Labour), Elfyn Llwyd (Plain Cymru), John McDonnell (Labour), Bob Wareing (Labour) and George Galloway (Respect). Campaigning comedians Mark Steele and Mark Thomas were there too, and of course there was veteran campaigner Tony Benn.
Then the marchers set off for Parliament Square. Police had cleared a space on the pavement opposite the House of Commons – but it was nowhere near big enough for all the marchers. The grass area in Parliament Square was completely fenced off.
Eventually College Green was made available and police allowed marchers through from Whitehall, to the pavement opposite Parliament and then to College Green in small contingents – interrupted to allow traffic to pass around.
This led to delays and frustration – and a sit-down protest by some students in an effort to get the traffic stopped. Others began to move the fencing around the grass area. In the end police had to give in to this. People power had prevailed again.
If this march had happened almost anywhere else in the world, for example in Burma, it would have made the front pages of most newspapers and topped television news bulletins in Britain. But it was hardly reported at all. The BBC gave it about two minutes in its early evening local London news but nothing else. The Independent carried a picture with caption but no report; the Guardian website reported it but the paper carried nothing; the Telegraph ignored it.
The march was well reported abroad, with foreign news bulletins carrying much more information than the British.
This is part of a regular pattern that leaves the public in Britain completely unaware of mass popular political activity and serves to deepen a sense of futility and alienation from the political process that discourages hope and involvement.
Posted by london communists at 11:13 am