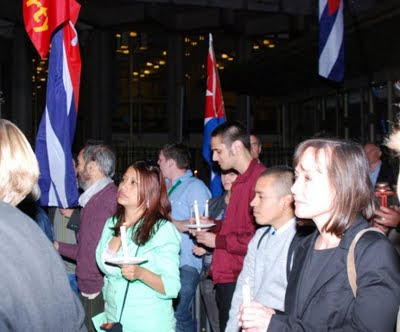 NCP comrades and supporters joined protesters outside the US embassy in London last week to demand the release of five Cubans arrested in 1998 on trumped-up charges of espionage. Some 400 demonstrators took part in an evening candle-light picket of the American embassy in Grosvenor Square on 1st October called by the Cuba Solidarity Campaign in support of Gerardo Hernández, Ramón Labañino, Antonio Guerrero, Fernando González and René González who are currently serving sentences of between 15 years and life. The vigil was supported by their families, Jeremy Corbyn, the London Labour MP who is also a prominent member of the Labour Representation Committee along with a number of union leaders.
Posted by london communists at 2:56 pm