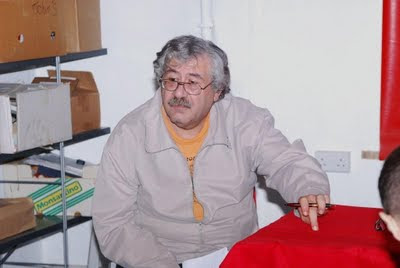 Communists and progressives gathered in London last week for a seminar on the meaning and impact of the Korean revolution to mark the anniversary of the foundation of the Workers’ Party of Korea on 10th October 1945.
Organised by Friends of Korea and chaired by Harpal Brar, the guest of honour was a diplomat from the DPR Korea embassy in London and contributors included NCP leader Andy Brooks, Michael Chant of the RCPB (ML), John McLeod of the Socialist Labour Party and Ella Rule of the CPGB (ML) along with Korean solidarity activists Keith Bennett and Dermot Hudson of the British Juche Society.
The discussion, held at the RCPB (ML) headquarters in south London, covered all aspects of life in Democratic Korea including the Juche philosophy, leadership and the role of the communist party in socialist construction. At the end of the seminar a congratulatory letter to Korean leader Kim Jong Il was adopted unanimously.
photo: Andy Brooks making a point
Posted by london communists at 6:59 pm